As most of America turns from new coal due to its release of massive amounts of pollution including global warming gases like CO2, the states of Illinois, Indiana and Kentucky are doubling down on a bet that coal’s future is bright.

Those three states have large reserves of high sulfur coal in what is known geologically as the Illinois Basin, an area rich in fossil fuels including oil as well as coal.

When the Clean Air Act of 1990 passed, the fortunes of Illinois Basin coal dived due to the high sulfur content that was addressed in the 1990 law. But due to a series of new environmental regulations and the prospect of new technology to burn and gasify coal, industry supporters are hoping their fortunes will change as a result of recent elections that placed coal supporters and climate change deniers in the majority of the US House of Representatives and increased numbers in the Senate as well as big increases in state legislatures in coal country.

New regulations to force utilities to scrub sulfur dioxide from their stack emissions has breathed new life into Basin coal since power plants are building scrubbers which again allows them to burn high sulfur coal. Those regulations include the now court over-turned rule known as the Clean Air Interstate Rule offered in the Bush Administration’s first term and the rule that has now replaced it, the Transport Rule which requires power plants in the eastern US to significantly reduce their sulfur dioxide emissions.

Utilities are now assessing the economic veracity of placing expensive scrubbers on their old fleet of power plants, especially in light of several other prospective rules that will force coal plants to spend money to control their emissions, including mercury. 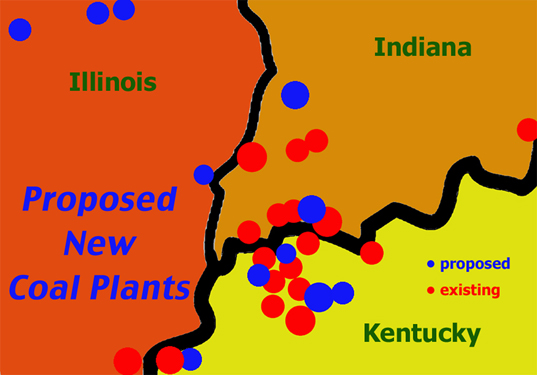 Now, in the Illinois Basin, coal proponents are looking to alter their technology and build plants that gasify coal to produce both electricity and something called syngas that can be used as a substitute for natural gas in a variety of uses.

All three states in the Basin have serious plans being proposed for two gasifiers in each state.

Of course, proponents seem oblivious to the enormous cost of building the plants and the fact that the added cost of capturing and sequestering (CCS) the huge CO2 emissions that come from this process just like the old plants.

The US Department of Energy has estimated that the costs of CCS adds a whopping 50% to the overall capital cost of building such a plant.

Only one of these plants is actually being constructed. That is Duke Energy’s Edwardsport plant in SW Indiana. When it was first proposed, Duke enlisted political support for the plant by claiming it would cost $1 billion and include CCS in 2004. Two years later the declared price rose to $1.2 billion without CCS. When the plant was given permission to build by the Indiana Utility Regulatory Commission in 2007, that figure was $1.985 billion and opponents warned that the cost would continue to rise.

Today, the price has risen to just under $3 billion but that does not concern Duke Energy since the deal struck with the IURC allows them to put their Indiana ratepayers at risk for the entire amount, much to the chagrin of customers since their rates will rise by more than 30% to pay for the plant which opponents offer evidence that the plant is not even needed to serve those same customers.

Those significant cost increases have not been lost on sponsors of the other plants in the region. To deal with that they have gone to their various state legislatures and offered legislation that forces customers in those states to pay a premium for gas and electricity produced by the plants. That cost is generally unknown since proposals are based only on the speculation of the sponsors which like Duke are generally thought to be low balled.

Indiana passed such legislation in 2009 that forced Indiana gas customers to pay a premium for gas from a plant proposed for Rockport, IN. Kentucky had legislation introduced in 2010 that was designed to do the same thing for a plant that is slated to produce both gas and electricity in Henderson County, KY. That legislation failed in 2010 but is likely to re-emerge this year.

In Illinois, similar legislation was rejected for a plant that would produce electricity in Taylorville but passed easily in January for a gasification plant in south Chicago and another near Mt. Vernon in the southern end of the state.

Several of the plants also plan to have big federal subsidies provided by federally issued “loan guarantees” that place most of the remaining risk of building these costly plants on taxpayers across the US.

All these plants are relying on a new pipeline designed to take away the massive emissions of CO2 they hope will be built by a private firm to send the CO2 to the Gulf of Mexico to help recover additional oil from depleted oil wells in the Gulf.

It is unsure just who will end up paying for the nearly 1000 miles of new pipeline to serve the plants. But is it estimated the pipeline will cost in excess of $2 billion. And it should be remembered that the process to get the oil out of the ground, called Enhanced Oil Recovery will end up increasing CO2 emissions since the oil will be burned to power industry and transport.

Yet another big economic problem with this scheme is something called “parasitic energy use.” Kentucky’s Center for Applied Energy Research has projected that from 25-40% of the energy produced by such a plant will be required to Capture and Sequester the CO2. Thus, the Duke plant, for instance would no longer be the 630 MW plant that ratepayers are paying for but no more than 473 MW.

These economic questions continue to haunt the gasification industry but state legislatures are creating a brand new and huge subsidy for these plants by forcing their constituents to pay more for their gas and electricity than they would have to from competitors.

If similar legislation is pushed for the construction of the pipeline the premium will rise significantly.

Opponents of these plants are doing all they can to stop them. The include the Sierra Club Beyond Coal Campaign and the Club’s state chapters joined with regional groups like Valley Watch, Save the Valley, and  Citizens Action Coalition in Indiana and Valley Watch in Kentucky and Illinois.