Forty-one years ago today my life changed although it took several years to discover just how much.

Earth Day 1970 was a tumultuous time. The protests of the 60s civil rights movement had been largely successful and similar actions to end the Viet Nam War were getting into full swing. America still had politicians who sought to better America instead of seeking to enrich themselves or feed their dubious ideologies. 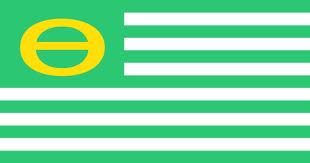 Theta is the Greek symbol for the Earth. Earth Day 1970 unveiled the first Theta Flag which for about a decade symbolized the movement and unity behind Earth Day.

And so it was with the fledgling environmental “movement” that was taking hold in the aftermath of rivers on fire, dead zones in the Great Lakes and air pollution emergencies in cities on both coasts.

At the time, I was a commercial mortgage loan officer at a large metropolitan bank and generally oblivious to causes of the environment and its impacts on human health. Hell, I even smoked a couple of packs of cigarettes each day.

I remember seeing hippies passing out literature on the Circle in downtown Indianapolis but thinking that the problems that plagued places like New York and LA were not germane to sleepy Naptown.  Little did I now that Indiana was on the road to make those places look like weak step sisters in the overall scheme of things.

On the news that night I watched Huntley and Brinkley describe various actions that were taking place around the country to drive home the need to protect the Earth. One in particular really caught my eye. There on the tube was an entire new car, a Ford Pinto, I believe, being buried in a grave to symbolize the future death of the automobile due to its high levels of pollution.

That night, I went to a showing of the movie, No Blades of Grass that was projected on the side of a building on the Butler University campus. That apocalyptic film hit a nerve with me and I felt a real need to become engaged in saving the planet.

Actually, about the only thing I did was to quit throwing my cigarette butts out my car window but at least it was a start. 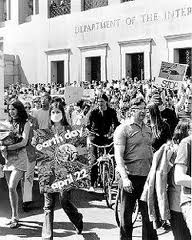 Shortly after that, national pride and concern for our collective future motivated the passage of the Clean Air and Clean Water Acts, the Safe Drinking Water Act and the Endangered Species Act. It seemed that others were also awakened by those 1970 Earth Day actions.

1970 was a different time. People cared for their fellow man then. Most of us still embraced the idea that we were Americans first and individuals second, that we all had a stake in the future and thus rejoiced in our differences.

Sadly, today, Earth Day is mostly an opportunity for polluters to spend their way into the green hearts of America and a day that politicians completely ignore. In fact those protections that were passed with great support from both parties in 1970, are under assault by people who are shilling for the polluters under the banner of smaller government and less taxes.

By the Way, I did quit smoking cigarettes on December 31,  1978, well after I had become actively involved in trying to improve the health and environment of SW Indiana.