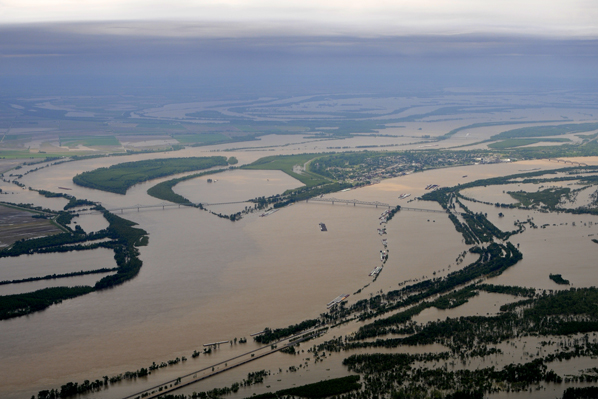 Flooding at the confluence of the Ohio And Mississippi Rivers is a sight to behold. Cairo, Illinois can be seen just right of center in this photograph shot by John Blair today at 12:13 PM. The Ohio River flows off the picture to the right while the Mississippi River snakes its way to the north and west toward the background of this photo. © 2011 John Blair

A pair of barges sit down river from the confluence of the Ohio And Mississippi Rivers loaded with explosives that may be used to destroy a levee to remove pressure from another levee that protects the town of Cairo, IL, seen in this photo on April 30.

The decision whether to blow the Birds Point levee just out of this picture to the left has yet to be made while impacted parties in Missouri argue that their homes and lands should not be sacrificed while resident of Cairo hope the breach will happen so that pressure can be relieved in their small town just right of center in the above picture.

Flooding on both Rivers has created an interstate conflict of major proportions, pitting the governors of both Missouri and Illinois against one another as each seeks to protect their own citizens from nature’s harm.

Both levees were built in the aftermath of the great flood of 1937 which rose to levels even higher than this flood along the Ohio River in many places. However, the flood at Cairo is record setting in the rare circumstance that both Rivers flooded at the same time.

The levee protecting Cairo is sufficiently high to protect the town to a crest of 64 feet but officials with the US Army Corps of Engineers worry that the pressure of both Rivers and a sustained crest, lasting several days could inundate the town at the junction of Illinois, Kentucky and Missouri. The Ohio River is expected to crest in the next day at 60.5 feet, a foot above the previous record.

Sadly, more rain is in the forecast and it can actually be seen in the distance in this photograph taken close to 12:00 PM today.

Editors Note: Climate scientists have long predicted severe weather conditions that could cause massive flooding in one area while others experience similarly severe droughts. Of course, there is no way to prove that an single weather event is the result of climate change but when taken in total the evidence certainly is increasing that climate change is upon us now and not in the distant future.