May 6, 2011-by John Downey in the Charlotte Business Journal 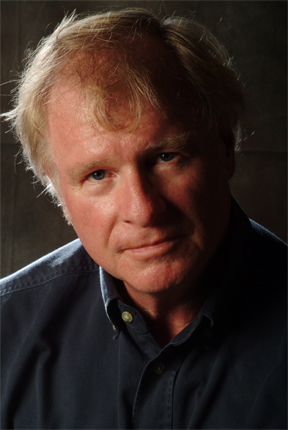 John Blair, president of Valley Watch, Inc. caused a stir at the Duke Energy annual meeting on May 5, in Charlotte, NC when he suggested that Duke CEO, James Rogers resign because he mislead the Indiana Utility Regulatory Commission under oath when he told them he had had no ex parte communication with the IURC regarding Dukes nefarious Edwardsport coal plant.

“It wasn’t a significant amount of stock,” says Blair, whose Valley Watch organization focuses on health and environmental issues in Indiana. “I saved my dividend check this year for just that purpose.”

Blair owns four shares of Duke stock. He bought the stock in 1985 — in Public Service Indiana. That was the first utility Rogers worked for as CEO. The stock was cheap because PSI was dogged by a $2.8 billion debacle in the unfinished Marble Hill nuclear plant.

In fact, Blair tore his dividend check at PSI’s annual meeting then to protest the Marble Hill plant.

He says he has not torn his check since. But he held on to the stock as successive mergers made him an investor in Cinergy Corp. and ultimately Duke.

“I didn’t buy it as an investment,” he says. He bought it to be able to talk at the annual meeting of the utility.

He talked Thursday, calling on Rogers to resign. It was the most confrontational exchange in almost two hours of questions Rogers submitted to from shareholders and activists.

Blair stands by his accusation that Rogers did not testify truthfully to the Indiana Utility Regulatory Commission last November. Rogers was questioned about influence peddling and an ethics scandal surrounding the hiring of a lawyer and cost overruns at Duke’s proposed Edwardsport coal-gasification plant — now expected to cost $2.88 billion to build.

Blair insists Rogers testified there were no “ex parte” meetings with regulators to the plant. (Ex parte simply means meetings held with one side in a dispute that the other parties did not participate in.)

There were such meetings. Rogers himself met with the commission chairman that spring for breakfast.

Rogers, whose cool demeanor slipped toward frosty during his exchange with Blair, said he testified there were “no inappropriate ex parte meetings.” The breakfast meeting was not held to plead for approval of higher costs for the plant.

Rogers says it was just an informational meeting to warn the commission chairman that Duke was about to make a filing that said costs were increasing. The meeting, he says, was appropriate.

Press accounts from the November hearing all say Rogers said there was no inappropriate contact. Blair says that’s just “parsing words.” He contends any meeting any Duke executive had one-on-one with a commissioner would violate rules against ex parte meetings. 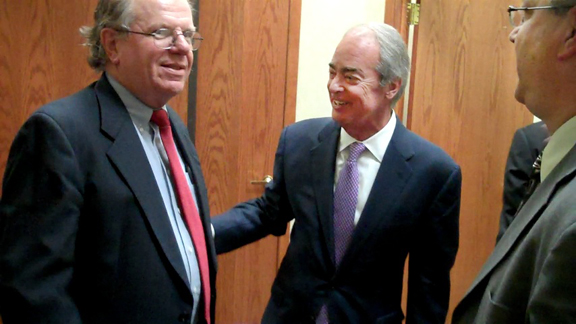 James Rogers, Duke Energy CEO (C) share pleasantries with adversaries, Mike Mullett (L) and Jerry Polk (R) shortly after he told the Indiana Utility Regulatory Commission that he had had no ex parte communication with the Commission concerning his Edwardsport debacle on November 3, 2010. Photo © 2011 John Blair

The chairman, David Hardy, was ultimately fired by Indiana Gov. Mitch Daniels over his handling of conflict-of-interest questions when Duke hired the commission’s counsel last summer.

Duke fired its Indiana president and the former commission counsel. And a top Duke executive in Charlotte resigned when emails between him and Hardy raised questions about whether regulators were too cozy with Duke.

Blair said Rogers should resign because of those problems. Rogers ignored Blair’s call for his resignation and defended both his testimony and Duke’s handling of the Edwardsport costs issues.

After Blair finished, Rogers dryly observed, “You probably didn’t own many shares of stock if you tear up your dividend check like that.”

On that, at least, Rogers was clearly correct.