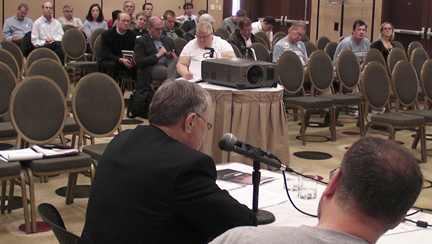 95% of those who spoke in the morning session of the Chicago hearing spoke favorably about the proposed Air Toxics rule currently under consideration by the USEPA to control toxic air emissions from coal fired power plants. Photo by John Blair

Twenty-one years after the US Congress ordered EPA to develop rules to control the release of toxic chemicals from coal and oil fired power plants, EPA proposed a rule to do so in March.

On May 24, EPA held a hearing in Chicago to taker testimony  from citizens about the plan. Valley Watch president, John Blair was one of the huge number of people who spoke for the proposed rule at the Chicago hearing. In fact, forty of the forty-two people who spoke at the morning session of the hearing spoke favorably about the rule.

Blair’s testimony can bee seen below:

Outside the hearing, Sierra Club and the Environmental Coalition of Little Village held a march against toxic pollution keying on the Fisk and Crawford Generating stations in Chicago. 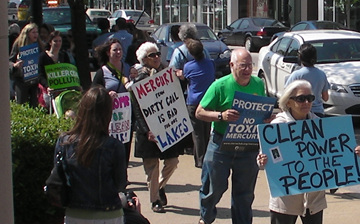 Demonstrators march outside the Air Toxics hearing in Chicago on May 24. Photo by John Blair

Blair testified that he was concerned about the high percentage of pro rule speakers, wondering if the typical industrial interests had intentionally stayed away because they knew a “fix was in” since EPA had announced earlier in the week that their “Industrial Boiler Rule” just finalized in March had been indefinitely delayed due to an outcry from industry about its expense even though EPA had proven a lopsided health benefit/cost ratio for the rule.