Grasshoppers come in a variety of shapes and sizes 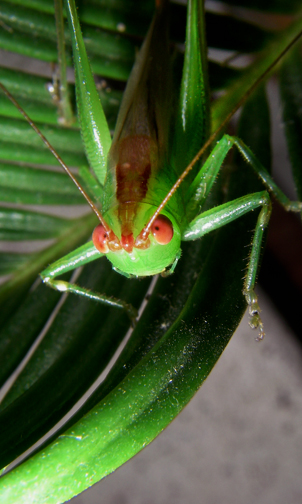 Grasshoppers are funny little things. They come in several varieties. some fly, some simply hop. some look like they are armored and others look kind of fragile.

Whatever their make up, they are usually gluttonous eaters, consuming the leaves of entire plants in a single day sometimes.

This red eyed grasshopper was seen on my porch on July 31 and was not shy like many of its counterparts until I had shot several pictures of it using a flash.

As summer dries up, there seems to be a n onslaught of grasshoppers which eat through flowers, shrubs and grass until they mate and die to wait for another year.

Download this page in PDF format
This entry was posted in Uncategorized and tagged grass hoppers, grasshoppers, nature pictures. Bookmark the permalink.