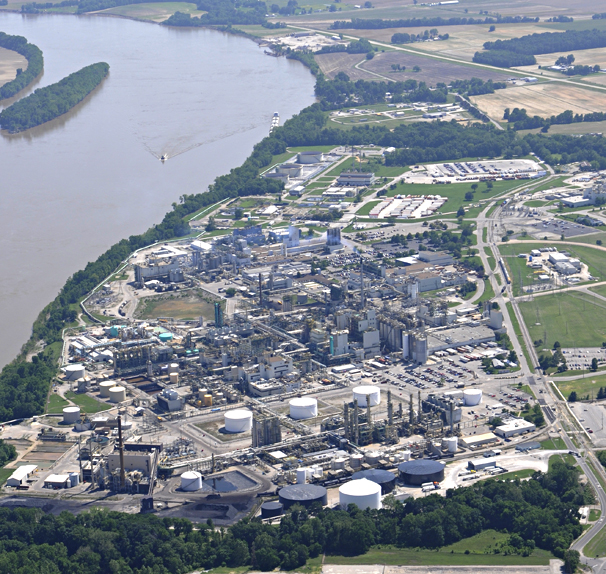 Sabic's sprawling chemical plant in Mt. Vernon has long been a source of concern for area residents. At one point, the rates for the cancers, lymphoma and leukemia were 300% of the national average in Posey County where it is located according to data from the Indiana Department of Health in 1991. Photo © 2012 John Blair.

The settlement, subject to a thirty day comment period and final approval from the Federal District Court in Southern Indiana is accompanied by an agreement for Sabic to replace current valve with new low emissions valve and valve packing material, designed toto significantly reduce the likelihood of future leaks of Hazardous Air Pollutants or HAPS as they are known in pollution control jargon. Emissions of  HAPS from leaking equipment may cause serious health effects including cancer, reproductive issues and birth defects.

In response to EPA’s inspection of the Mt. Vernon facility, SABIC engineered HAP emission controls for hundreds of drains and trenches and the settlement further requires SABIC to control similar emissions from an oil/water separator. The estimated cost of these controls is almost $4 million. SABIC will also invest an additional $1.3 million to control HAP emissions from certain process vents as a supplemental environmental project. The compliance program and engineered controls will reduce HAP emissions by up to 136.7 tons per year.

“Communities near large industrial facilities depend on EPA to protect public health and the environment by enforcing our nation’s environmental laws,” said Cynthia Giles, assistant administrator for EPA’s Office of Enforcement and Compliance Assurance. “Today’s settlement with SABIC will reduce the potential for future violations and protect residents in Indiana and Alabama from emissions of hazardous air pollutants.”

In addition to paying a penalty, SABIC will implement a comprehensive program to reduce emissions of HAPs from leaking equipment such as valves and pumps. The emissions, known as “fugitive” emissions because they are not discharged from a stack but rather leak directly from equipment, are generally controlled through work practices, like monitoring and repairing leaks. The settlement requires SABIC to implement enhanced work practices, including more frequent leak monitoring, better repair practices, and innovative new efforts designed to prevent leaks.

Sabic Innovative Plastics produces a large quantity of hazardous chemicals at the plant. Those include phosgene gas was the deadly ingredient in nerve gas produced form the military in the first half of the twentieth century. Also produced at the plant in large quantities is Bis-Phenol A or BPA which has been subject to controversy of late for causing all sorts of health maladies, especially for children when it is used as a plastic softener to keep certain plastics from being rigid.

Valley Watch is always left to wonder why it takes federal intervention from the EPA and the Justice Department to uncover and enforce the Clean Air Act and other laws designed to protect citizen health. Indiana has had a dismal enforcement record for years but under Governor Mitch Daniels decided to eliminate the Enforcement branch of the Indiana Department of Environmental Management altogether in December 2008.

Built originally by General Electric for GE Plastics the plant has operated in Mt. Vernon for more than fifty years and at one time was the second largest source of “toxic releases” in the entire country. Those releases were reported to the US EPA’s Toxic Release Inventory or TRI which began in the aftermath of the horrible disaster in Bhopal, India in December of 1984. There as many as 100,000 people perished when a substance called methylisocyanate or MIC escaped from a plant operated by Union Carbide Corporation.

Sabic, which stands for Saudi Arabia Basic Industries Company, bought the plant in 2007 from GE  for $11.6 billion.