If the Tri-State were a State, we would be 3rd in the release of toxic chemicals to the air, nationwide.

Last week, headlines in this region showed that Kentucky placed first and Indiana fourth in the release of toxic chemicals to our air from coal plants, according to a study by the Natural Resources Defense Council.

None of the stories looked at the cross border figures like the region considered the “tri-state” of Kentucky, Indiana and Illinois. Therefore Valley Watch decided to take this ominous study a step further and did its own analysis of those coal-fired power plants that currently operate within a 100 kilometer radius (62 miles) of Vanderburgh County.

Our analysis of EPA’s Toxic Release Inventory and EPA’s eGrid power plant data base reaffirms the shocking problem we have in this area which sports the largest concentration of coal plants in North America if not the world at 15,113 megawatt total capacity. 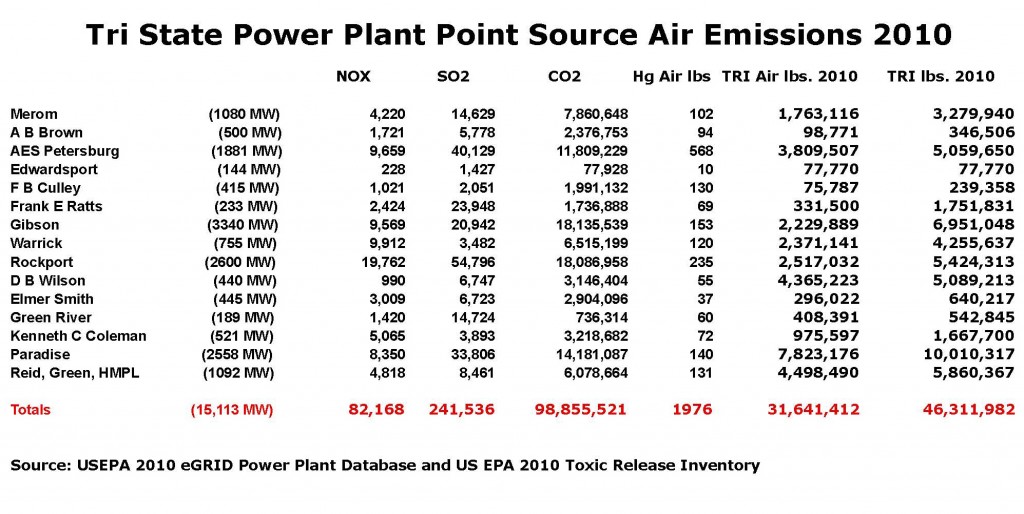 Valley Watch found that this relatively small area, about a third the size of Indiana and a little less than a third the size of Kentucky would place Third if the studied region was a separate State, just ahead of Pennsylvania and far surpassing Indiana as a whole at 31,641,412 pounds of air toxics released in 2010. 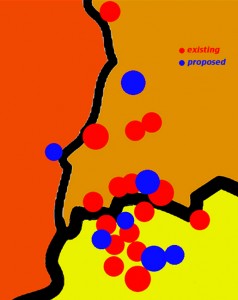 One disturbing statistic that jumps out from this analysis is that most of the power that is produced in the region is transmitted to regions far removed from the tri-state. In what Duke Energy Chairman and CEO, James Rogers once referred to as “exporting coal by wire,” 10,945 Megawatts of the total capacity is sent to other regions so they can grow while this region gets the massive pollution that power production with coal creates.  That stifles our own growth as most clean business refuses to consider a place that seems so willing to foul its own nest.

This region consumes only 4,168 MW ( a mere 27.5%) of that power but it should be remembered that about half of that generation is used to power three of the remaining eight aluminum smelters in the USA.

It should also be noted that three of the plants in this region comprise three of the top ten generators by size in the nation.

“When Valley Watch formed in 1981 to protect the public health and environment of the lower Ohio River Valley, we sought to stop this region from becoming the major supplier of electricity for much of the USA. While we have succeeded, in part by stopping several additional coal plants and other polluters over the years, it is still this region that utilities seek out to build their power plants,” asserts John Blair, president of the small Evansville based environmental health advocacy group.

Presently, there are two new coal plants permitted in Kentucky, at Cash Creek in Henderson County and near Central City, neither of which has chosen to begin construction. However, in Indiana, Duke Energy has a new, extremely high cost coal plant under construction at Edwardsport and Indiana has just issued a construction permit to the Indiana Gasification plant in Rockport.

Valley Watch has joined with a coalition of environmental and consumer groups to fight those plants that are unneeded and will cost Hoosier consumers significantly should they come to fruition.

Coal fired power plants, as a class, are the largest polluters on Earth and Valley Watch believes that power plants should be built in the immediate region in which the power is being consumed so that the burden of pollution is shared by those consuming the energy.

“To burden a single region with large concentration of coal fired power plants is a serious issue of environmental and health justice. It is time for citizens and communities across the tri-state to stand up and say ‘no more’ instead of passively accepting what utility executives in Knoxville, Columbus (Ohio) and Charlotte think is most profitable,” says Blair.

3 Responses to If the Tri-State were a State, we would be 3rd in the release of toxic chemicals to the air, nationwide.