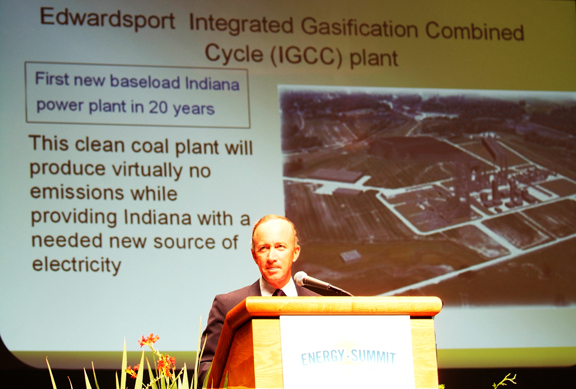 Indiana Governor Mitch Daniels made sure his regulators would force Duke’s Indiana customers to take the risk for the Edwardsport plant. Here, he is shown making that case before the “Energy Summit of Southwest Indiana” held on August 30, 2007, the day before the IURC held a public hearing on the plant. Photo © 2007, John Blair

A Report published by Valley Watch, Sierra Club, Citizens Action Coalition and Save The Valley is an indictment against Duke Energy and its corruption in building the $3.5 billion Edwardsport Generating Station which has become a nightmare for Duke’s Indiana customers who have been forced to bear the bulk of the risks for the ill fated plant.

David Lott Hardy, center, then Chair of the Indiana Utility Regulatory Commission, declares, “We will get this thing built” at the Energy Summit of Southwest Indiana held August 30, 2007, the day before the public hearing his commission conducted on Edwardsport. Hardy was later indicted on charges stemming from “ethics violations” as a result of his handling of Edwardsport dockets. Photo © 2007 John Blair