January 15, 2013-A Washington Post Editorial. Editor’s note: Valley Watch has long called for a carbon tax that would be refunded to people on an equal basis so that poor people who use little energy could actually benefit from it. We have called such a tax the “Freedom Tax” since it allows those who insist on wasting energy the ability to do so but they would have to pay for the privilege.

The National Oceanic and Atmospheric Administration (NOAA) announced last week that 2012 was the warmest year on record in the contiguous United States. By far — a whole degree Fahrenheit.Scientists can’t yet know to what extent man-made emissions influenced the heat and calamitous drought. But the result is nevertheless ominous, “a huge exclamation point on the end of several decades of fairly consistent warming,” as NOAA’s Deke Arndt put it. The year offers a vision of what will happen more often on a planet that is heating — slowly and fitfully, not every year warmer than the last, but inexorably.

There is still uncertainty. Though they have a range of estimates, scientists still do not know exactly how sensitive the global climate system is to human carbon emissions and exactly how steep the long-term temperature line will be. Predicting the consequences of a given temperature rise is also difficult. That’s an argument not for doing nothing but for managing the risks, spending now to avoid the likelihood of much greater costs later, as any good business would do in the face of certain threats of uncertain magnitude. 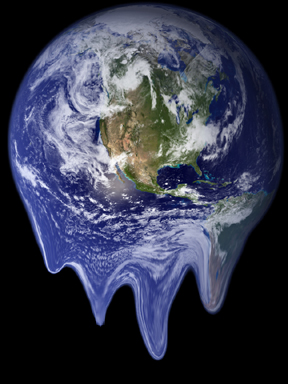 The smartest hedge would be a national carbon tax. It would marshal the market’s power to wring carbon out of the economy, putting decisions about the direction of energy and manufacturing in the hands of consumers and businesses that meet their demands, not Congress and interest groups that lobby lawmakers. When people must pay something for their pollution, they pollute less and invest in cleaner alternatives. A carbon tax would provide more certainty to industry and investors who currently can only guess at what climate policy will look like year to year.

But, given the dim debate on global warming in Congress, another consequence of a carbon tax might be more appealing to policymakers: revenue. Resources for the Future estimates that a tax set at $25 per ton of carbon dioxide would raise $125 billion annually — more than would be saved by eliminating the mortgage interest tax deduction. Even if much of that were rebated to ensure that low-income households weren’t unduly hurt — the right policy — a sizable chunk would be left to shrink the deficit or ease the major tax reform that Washington’s leaders have been promising.Implementing a national carbon tax would be only one step toward addressing climate change, a problem that must ultimately be dealt with globally. But it would be a big one.