A bad year for coal but not because of government regs

It was supposed to be a better year for U.S. coal producers.

But railroad congestion, a mild summer and indications that coal prices have yet to hit bottom have all conspired against the fuel, while cheap and plentiful natural gas continues to put pressure on the industry in the U.S.

U.S. coal producers have seen their share prices hit especially hard in the last several months. Though environmental rules are making new coal plants prohibitively expensive and leading to the closure of some older plants, it’s really market conditions — oversupply and the advent of cheap natural gas — that are hitting coal miners hardest, said Ken Colburn, a senior associate at the Regulatory Assistance Project who specializes in air regulations.

“I don’t think this is an easy cakewalk necessarily, but nothing the (Environmental Protection Agency) does will lead to the kind of impact on coal as a fuel that the market is having,” 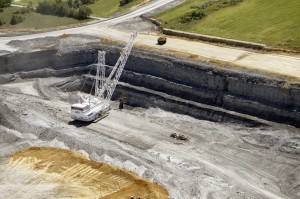 Huge mining machines called draglines are used to scoop up more than 150 cubic yards of earth with each pass. Strip mining is one of the most destructive things that man has done to the earth. Photo © 2010 John Blair.

Colburn said. “I think the EPA is probably enjoying a scenario where the market is doing a lot of its work for it in terms of its concerns about coal-based emissions.”

“They typically derive most of their profits from metallurgical coal,” said Kirk McDonald, an analyst with Clayton-based Argent Capital Management who follows materials and energy. “Especially with what is happening in China, domestically there, they’re producing less steel now.”

The Goldman report highlighted the continued concerns about the industry, said Kristoffer Inton, an analyst with Morningstar.

Early this year, conventional wisdom said the industry would see a reprieve due to an exceptionally cold winter that led to more coal and electricity usage, drawing down utility stockpiles. Instead, it was so cold that some railroads were damaged, compounding the already strained network that now carries fuels competing with coal: shale oil and gas.

Then China announced last week that it would ban imports of dirty coal, putting further pressure on the global coal market. While some reports suggest it won’t affect Chinese power plants and that many imports already met the standards, markets punished coal stocks nonetheless.

“It’s been a string of bad luck,” he said. “You add up all these factors, and it’s just been a difficult year for the coal guys so far.”

The Stowe Global Coal Index of coal and coal-related stocks has declined 12.7 percent this year, with most of that lost coming over the past month.

Creve Coeur-based Arch Coal’s share price is down 31 percent over the last month.

The negative sentiment also has hit the company’s debt. On Thursday, the price of Arch Coal’s 7 percent bonds that mature in 2019 tumbled to 53.75 cents on the dollar, its lowest price ever, according to Bloomberg News.

Newly public Foresight Energy, which focuses on Illinois Basin coal and is headquartered in St. Louis, closed on Thursday at $17.37, down 13 percent from its June initial public offering price of $20 and its lowest price since going public. 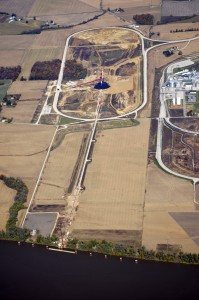 One of the newest coal docks on the Ohio River. Foresight Energy built this one in 2011 to export coal to world markets from the Illinois Basin. © 2011 BlairPhotoEVV

As of Thursday, shares of the world’s largest private coal producer, St. Louis-based Peabody Energy, had fallen 22 percent in a month. That followed its removal from the Standard & Poor’s 500 index of large companies and a downgrade to “sell” from Goldman this month.

Peabody emphasized its high-quality Australian reserves will still be able to compete in China despite the country’s ban of the dirtiest coal varieties.

It says metallurgical coal supplies should fall after coal companies collectively announced reductions of 25 million to 30 million tons this year, which represents 10 percent of the seaborne supply. Domestically, Peabody is inking contracts for its western coal at “materially higher levels than published indices,” according to a market commentary it released last week.

“Coal, like any bulk commodity, is a classically cyclical industry, and we’re now a couple years into a tough part of the cycle where supply has been plentiful,” Peabody spokesman Vic Svec said. “The good news is that demand remains strong globally.”

The company released a bit of good news that investors seemed to cheer Tuesday, announcing it was raising its outlook for earnings before interest taxes, depreciation and amortization in the third quarter to $190 million to $210 million, above its previous range of $150 million to $200 million.

“Our operations are performing well as we experienced higher-than-expected results from the Western United States, improved performance from Australian metallurgical coal mines and continued cost reductions across the platform,” Peabody CEO Greg Boyce said in a statement.

Railroad transportation continues to be a challenge, said Svec, though conditions are improving.

That has slowed the market’s recovery. Utilities are at a nine-year low of coal reserves from the cleaner-burning Powder River Basin, he said, but rail issues make them hesitant to buy more.

“While utilities are relatively low on supplies they’re not bidding into a market for coal they can’t get delivered,” he said.

Utilities should have to replenish some of their coal, but the fuel will continue to compete with new commodities like shale oil and gas for room on the rails.

The railroads are making investments to fix capacity constraints, and Peabody expects “continued demand growth in the United States and globally,” Svec said.

The U.S. Energy Information Administration, on the other hand, predicts coal consumption will fall 2.6 percent next year.

Meanwhile, China is finishing a rail network that will allow it to use its own coal reserves. That, and any moves that curb imports, could lead to “a domino effect” in the seaborne markets, Morningstar’s Inton said.

Australia and Indonesian coal producers will pivot to India and South Africa, and their suppliers will pivot elsewhere in the global seaborne market. That could hurt U.S. producers like Arch, which hopes to nearly triple its exports to 30 million tons by 2020, according to an investor presentation.

“Ultimately, U.S. coal, which was really a swing supplier anyway, is most likely to be forced out of the seaborne market,” Inton said.

“Europe and the Americas, as well as Japan and South Korea, are more natural markets for U.S. thermal coals, but actions taken by China can have impacts on the seaborne marketplace,” Arch Coal spokeswoman Logan Bonacorsi said.

Peabody, with its Australia reserves, may be able to use India to cushion slowing Chinese demand, Inton said.

Peabody’s Svec said India’s power plants are along the coast, where they’re easily supplied, and the country’s new prime minister has pledged to improve electric reliability.

“Their utilities are at critically low supplies of coal,” Svec said. “We would expect India to be perhaps the fastest coal-importing nation over the next several years.”

Jacob Barker is a business reporter at the Post-Dispatch. Follow him on Twitter @jacobbarker and the Business section @postdispatchbiz.