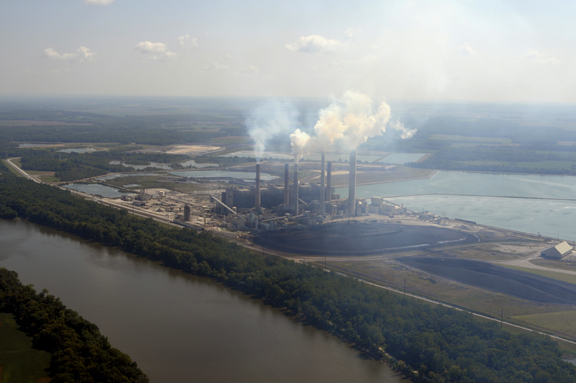 Duke’s Gibson Station is the second largest coal plant in North America at 3,350 MegaWatts of production. It requires a 3,800 acre reservoir to cool the massive plant. Photo © 2013 John Blair.

Air pollution is not only causing long-term damage to the planet and human health, but it is already killing millions of people worldwide. In an editorial published November 14, 2016 in STAT, David Hunter, Vincent L. Gregory Professor in Cancer Prevention at Harvard T.H. Chan School of Public Health, and Francesca Dominici, professor of biostatistics and senior associate dean for research, call for actions that would mitigate climate change in the future—and alleviate the immediate health burdens from air pollution.

One in eight deaths worldwide each year is linked to air pollution, according to the World Health Organization. This translates to approximately 7 million people—far more than the number of deaths due to HIV/AIDS, tuberculosis, and malaria combined. In addition, air pollution contributes to disabling conditions in millions of people including asthma, chronic obstructive pulmonary disease, and heart disease and stroke.

Cutting back on burning fossil fuels and biomass would have immediate health benefits, and also meet climate change mitigation goals, the authors wrote. They urge delegates at the United Nations convention on climate change in Marrakech this month, and the incoming U.S. administration, to take this into consideration. “Even climate change skeptics who deny the scale of future environmental impact should not tolerate of the millions of deaths currently caused by air pollution today,” they wrote.