March 1, 2017 – by David Schlissel, IEEFA. Editor’s note: Valley Watch and our colleagues, Citizens Action Coalition and Sierra Club have challenged the Edwardsport plant since 2006 before the IURC and IDEM. Sadly, we failed to stop the plant. David Schlissel has served as our “expert before the IURC on several of the “dockets.”

If the “clean coal” integrated gasification combined cycle (IGCC) technology promoted at home and abroad by the U.S. utility industry sounds too good to be true, it’s because it is.

That’s why Moody’s Investors Services warned the other day that it might downgrade the creditof Mississippi Power Company because of the declining competitiveness of the company’s  Kemper County IGCC plant.

IGCC is experimental and expensive and may well always remain so. It aims to merge three separate procedures into one unified but exceptionally complicated operation.

Step one turns coal into what’s known as synthetic gas, or “syngas,” which is said to be more environmentally friendly to burn than coal itself. Step two removes carbon dioxide from the syngas (rather than taking it out “post-combustion,” as is traditional in coal-fired generation). Step three fires the gas and generates electricity.

Two IGCC plants have been built in the U.S. in recent years: Edwardsport Generating Station in Indiana and Kemper County Energy Facility in Mississippi. Each is a distinctive first-of-their-kind plant placed into production on a commercial scale at huge costs to ratepayers—by Duke Energy, which owns Edwardsport, and by Mississippi Power, the Southern Company subsidiary that runs Kemper.

PROMOTED AS THE FUTURE OF CLEAN POWER GENERATION IN AMERICA, NEITHER HAS LIVED UP TO ITS HYPE. 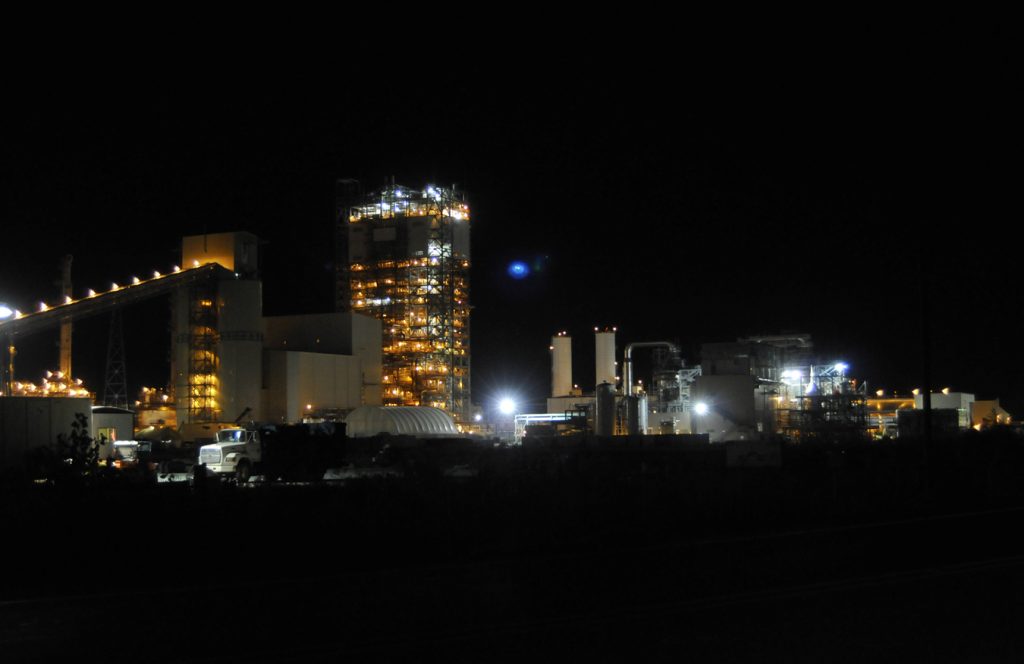 Duke’s Edwardsport plant is an imposing place at night. unfortunately, it has never worked as Duke promised and has become, instead a real lemon for the company’s ratepayers who are stuck with the bill because the Indiana Utility Regulatory Commission gave Duke a blank check to spend as much as they wished knowing that ratepayers would pay in the end.. Photo © BlairPhotoEVV

Both Edwardsport and Kemper have proven far more expensive to build than originally proposed.

Edwardsport, which began construction in 2008 with an estimated budget of $1.985 billion, cost $3.55 billion in official construction costs by the time Duke began to put it online in 2013. That cost overrun, big as it is, actually understates the full price of the plant because it doesn’t include the more than $600 million Duke was allowed by regulators in Indiana to charge customers ahead of activation.

Kemper’s construction costs had skyrocketed from an estimated $2.4 billion at the time the state of Mississippi gave permission to build the plant to over $7 billion earlier this year—and the plant isn’t even completed yet.

BOTH TOOK FAR LONGER TO BUILD THAN ORIGINALLY PROPOSED.

Edwardsport was supposed to have been finished by the summer of 2011, but wasn’t officially declared online until 2013 and its essential startup testing wasn’t done until the spring of 2014.

Kemper, originally scheduled to enter commercial service on syngas in 2013, began to produce some power in 2014—but as an expensive natural gas-fired operation rather than the expensive IGCC plant it was designed to be. The plant has only begun to produce electricity in the past few  months.

BOTH HAVE PROVEN SHOCKINGLY UNPRODUCTIVE.

Kemper has operated at an average 51 percent capacity factor but has done so almost entirely on natural gas since it began producing power in August 2014.

BOTH HAVE PROVEN EXTRAORDINARILY EXPENSIVE TO OPERATE.

From 2013 through 2015, Edwardsport’s average cost of producing power was $64.89 per megawatt hour, almost double the average cost of buying energy from the surrounding Midcontinent Independent System Operation market. This has meant that in addition to costing more than expected to build, Edwardsport is costing Duke’s Indiana ratepayers hundreds of millions of dollars more to operate than it would have had it simply bought power at market rates.

When Mississippi Power applied for a certificate to build Kemper it said that the plant’s maintenance capital + non-fuel O&M expenditures would average about $51 million for each of the plant’s first 5 years of operations. The company has now said that it will spend an average of $200 million each year on these capital and non-fuel O&M expenditures or an increase of almost 300 percent.

ADD TO THESE TROUBLED HISTORIES THE NEWS LAST WEEK that Southern is conceding finally that Kemper isn’t feasible. CEO Thomas Fanning cited “overwhelming change” in the company’s long-term natural gas price forecast, although cheap gas for quite some time has made coal-fired generation of any kind less and less appealing.

The company’s acceptance of this trend comes late. And Kemper is left now as the most expensive gas-fired plant ever built. It’s a project that should never have come to pass, as we argued years ago, and one that Southern showed a remarkable absence of prudence on. Its customers in Mississippi, unfortunately, are left holding the bag.

The bottom line—and the hard lesson—on both Edwardsport and Kemper is that they are failed experiments. They were absurdly expensive construction projects, they are very costly to operate, and they are unreliable.

While the stated intention behind each project was to reduce carbon-dioxide emissions and to do it affordably, neither goal has been achieved at either plant.

The Edwardsport and Kemper IGCC projects do not deliver, they are out of step with the times, and they cost much more than other forms of power generation—renewable energy included.

Edwardsport and Kemper are electricity-generation models to avoid.

David Schlissel is director of resource planning analysis at the Institute for Energy Economics and Financial Analysis.