Sabic Innovative Plastics, (Formerly GE Plastics) in Mt. Vernon, IN has decided to partially wean itself from the Vectren grid by building their own electrical and steam generation plant onsite. Their action frees up considerable capacity for Vectren, which still provides back up electricity for the giant plastics manufacturing facility east of Mt. Vernon. 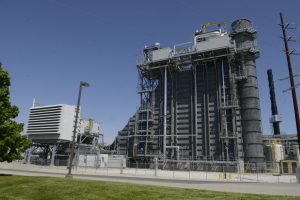 Sabic has completed their 80 Megawatt steam and electric generating plant at their manufacturing facility east of Mt. Vernon. A ribbon cutting ceremony was held 4/26 although the plant has been in testing mode for several months. ©2017 BlairPhotoEVV

For years and prior to the construction of the cogeneration plant, Sabic burned coal to generate steam used in the manufacture of a broad range of plastics including Lexan and Ultem. Sabic claims the cogeneration plant will create substantial environmental improvements in the region including a 35% reduction in Carbon Dioxide emissions and a 43% reduction in their “non-hazardous” waste primarily consisting of coal ash which previously had to be landfilled offsite. Sabic officially stopped using coal in January of this year.The cogeneration unit is fueled with natural gas from a new thirty mile pipeline which transverses the Ohio River running from Robards, KY.

One interesting fact we learned today was that the plant has about 25% higher generating capacity in the winter than in the summer due solely to ambient air temperature. In the winter, the plant is capable of producing more than 100 Megawatts while summer capacity is rated at 80 megawatts. 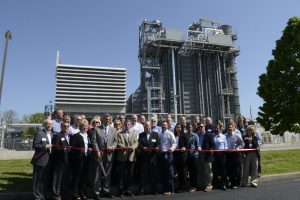 A ribbon cutting ceremony was held 4/26 to celebrate the opening of Saber’s 80 MW CoGeneration facility. © 2017 BlairPhotoEVV

The plant originally began operations in 1960 by General Electric Company to produce a single product, Lexan but was purchased by Sabic in 2011.

In November, Vectren announced the pending retirement of their Warrick County facility Culley 2 as well their Posey County AB Brown plant, a move partially facilitated by the construction go the cogeneration plant.