March 27, 2018 – by Arctic Sea Ice News and Analysis – Arctic sea ice appears to have reached its annual maximum extent on March 17. This is the second lowest Arctic maximum in the 39-year satellite record. The four lowest maximum extents in the satellite record have all occurred in the past four years. NSIDC will post a detailed analysis of the 2017 to 2018 winter sea ice conditions in our regular monthly post in early April. 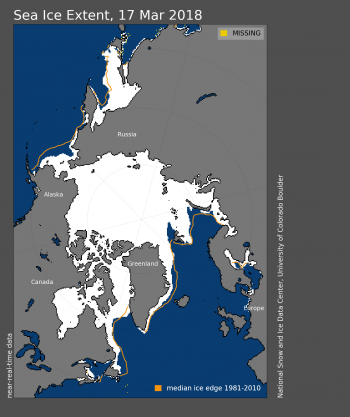 In March 2017, we reported a new record maximum being set, with 2016 sliding to the second lowest, and 2015 the third lowest. In November 2017, we updated our calculation of the monthly average sea ice extent in the NSIDC Sea Ice Index, resulting in 2016 tying with 2015. 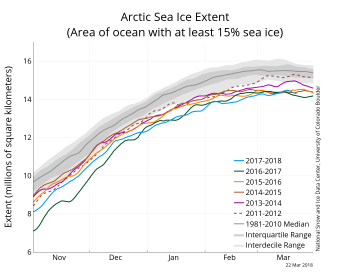 The ice growth season ended with very low sea ice extents in the Bering Sea in the Pacific side of the Arctic, and in the Barents Sea in the Atlantic side of the Arctic. The regions of reduced ice cover reflect the combined influences of late autumn freeze-up as well as persistent high air temperatures throughout the winter. Freeze-up was especially late in the Chukchi Sea, due in part to the effects of strong ocean heat transport into the area through the Bering Strait. February then saw an early retreat of sea ice in the Bering Sea. Sea ice extent on the Atlantic side remained below average throughout the winter, which also appears linked to warm ocean waters. While air temperatures at the 925 hPa level (about 2,500 feet above sea level) remained well above average through most of winter, February saw an extreme heat wave over the Arctic Ocean. This is the fourth winter in a row that such heat waves have been recorded over the Arctic Ocean.

A late spurt in sea ice growth just prior to the maximum occurred in the Barents Sea near Novaya Zemlya; sea ice retreat just after the maximum was led by ice loss in the Bering Sea.

The February 20 and 21 timing of the minimum (the same extent was recorded on both dates) was just slightly earlier than the 1981 to 2010 median date of February 24 for the minimum. Over the satellite record, the Antarctic minimum has occurred as early as February 15 and as late as March 6.

Compared to the Arctic, air temperatures over the sea ice regions of Antarctica over the past season (austral summer) have been closer to their climatological average, hovering within 2 degrees Celsius (4 degrees Fahrenheit) of the 1981 to 2010 average. Relatively rapid and early growth of ice along the eastern Weddell Sea ice edge led the beginning of the autumn sea ice expansion.

Please note this is a preliminary announcement. At the beginning of April, NSIDC scientists will release a full analysis of winter conditions in the Arctic, along with monthly data for March. For more information about the maximum extent and what it means, see the NSIDC Icelights post, the Arctic sea ice maximum.