The State of Indiana did issue an air pollution and construction permit for the facility in the Spring. Valley Watch and Southwestern Indiana Citizens for Quality of Life have formally challenged the  permit using the national environmental law firm, EarthJustice to represent us.

We remain confident that this plant will never be built due to its questionable economics and the fact that the sponsors seem not to understand exactly how to finance it, let alone build and operate it. In fact, Riverview Energy and LincolnLand Economic Development Corp both have failed to have any public forums where citizens can attend for free to ask questions of the sponsors.

A hearing was held at Heritage Hills High School last December where 47 people spoke in opposition to the proposal while only seven people, mostly those who promote economic development, spoke in favor. That did not deter the Indiana Department of Environmental Management from issuing a permit. 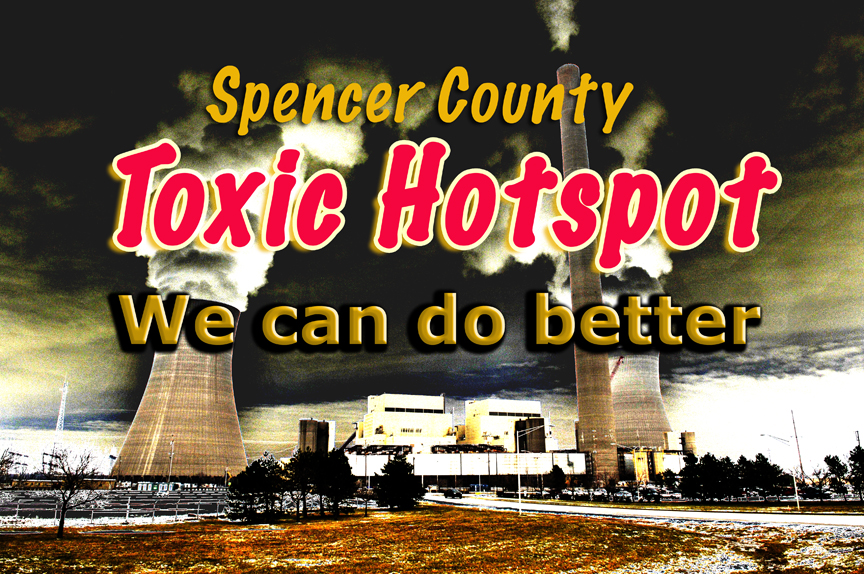 Every few years someone pursuing a “get rich quick” scheme comes up with an idea to use coal as a feedstock for other forms of energy like liquid or gaseous fuels. In my forty some years as an Evansville resident, there have been more than a dozen of these ploys proposed for using coal in the Illinois Basin. 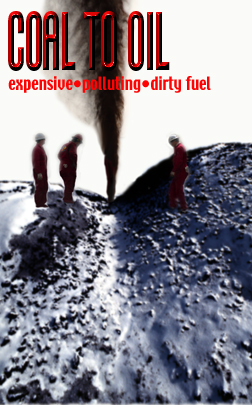 Only one has been built.

That was the financial disaster at Edwardsport proposed in 2004 by Duke Energy to cost $1.4 Billion and would be “Carbon Capture Ready.”  Yes, today that plant is operating but at a level no where near what Duke claimed it would when they persuaded a proven corrupt Indiana Utility Regulatory Commission in 2007 to give them authority to spend $1.985 Billion to build a 630 Megawatt “Integrated Gasification Combined Cycle (IGCC) plant they promised would operate at greater than 80% efficiency. Duke, not only had their hands in ratepayer pockets, they also had $133 million in Federal Income Tax Credits.

Today, that plant has failed using nearly every criteria, especially regarding its cost which the IURC has allowed to increase to a whopping $4.5+ Billion lemon, that leaves Duke’s ratepayers holding the bag for at least $3.65 Billion.  And it is nowhere near capturing any of the voluminous Carbon Dioxide that is contributing to climate change. If Duke had captured CO2, that would have raised the capital cost for the plant by an additional 50% and also cut the efficiency of the plant another 25-40% by consuming that much of the power the plant was designed to produce.

At about the same time Duke was making its pitch, calling Edwardsport, “clean coal,” another proposal was announced by then Governor, Mitch Daniels for Rockport, a town that was already one of the dirtiest communities on Earth for Toxic Emissions (approximately 30,000,000 pounds, according to USEPA’s Toxic Release Inventory at that time).

It was called Indiana Gasification (IGLLC) and sponsored by a financial holding company named Leucadia National. Like Duke, they hoped to cash in on the generosity of Federal and State governments. The Feds were ready to give them a Department of Energy Loan Guarantee of $2.8 Billion to pursue their dream of riches. And the State of Indiana gave them their biggest plum, legislation that made the State of Indiana their only customer buying all the syngas produced by the plant but then would force Indiana residential and commercial customers (not industrial customers, of course) to buy the syngas from the state at a massive premium just for the honor of getting our home heating gas from coal. 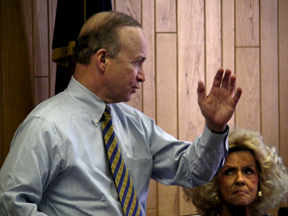 Then indiana governor, Mitch Daniels gestures as he tries to explain why Hoosier residential gas consumers should pay a premium for the privilege of heating their homes from coal derived gas shortly after he signed a bill forcing them to do so. Looking on is the late Rockport Mayor, Nedra Groves. © 2009 John Blair

After following what I called the Communist Chinese “model of business,” that plant was never able to reach financial and economic viability due to a variety of factors including cheap natural gas and loud protests from opponents like Valley Watch and the Citizens Action Coalition.

Finally, in 2014, Leucadia abandoned the project after I personally met with their CEO to discuss the enormous risks the company was taking even with all that taxpayer assistance.

But sadly, there is no shortage of stupid enrichment schemes for people when it comes to coal, especially around here, where in some circles, coal is God.

In 2010, a company of Connecticut carpetbaggers calling themselves Clean Coal Refining Corp. decided to exploit the hopes and dreams of economic development officials of Vermillion County, just north of Terre Haute. They promised a $3 Billion coal to diesel plant at the former US Army Newport Chemical Depot where deadly nerve gas had been stored since early in the 20thCentury for possible use in chemical warfare. Remote and secure, Clean Coal Refining took on another name Riverview Energy Corp. when it became apparent that coal refining was not the way to market a new project, even in coal friendly Indiana.

Once the name was changed sponsors promised Vermillion County officials the moon and more. After all, their project would be an economic panacea for the area, revitalizing a depressed section of the state. It gained full support of then Governor Daniels and his Lt. Governor, Becky Skillman who directed the State Center for Coal Technology Research at Purdue to provide support for the project.

But then, something went very wrong. Clean Coal Refining had optioned 1,500 acres of the Depot’s 8,800 acre facility, promising a “feasibility study” of the process and proposal that would make financing of the project easy. But, the study was never made public and financing never materialized.

After six long years, in October 2015, the Depot’s Reuse Authority decided they had had enough of the Connecticut’s firm’s empty promises and officially refused to renew Riverview Energy’s option on the land, effectively shutting the project down.

Like most people hoping for large profit on small investment, Riverview went to the State of Indiana asking where else they might go to develop their ill-fated project. They were told to check out Spencer County that was already a heavily polluted venue that had a reputation for taking anything that promised jobs, big investment and lots of chemical emissions. They talked to LincolnLand Economic Development Corporation, which had sought not only the failed Indiana Gasification project, but also a more recently failed Ohio Valley Resources mega fertilizer plant.

In almost total secrecy, Riverview and LincolnLand set the stage for 512 acres of prime farmland to be annexed into the bucolic town of Dale for use in a scaled down $2.5 Billion project, that would nearly double the physical area of the town. Again, nearly secret meetings were held to negotiate the sale and annexation of the land for use by Riverview. But secrets are fairly hard to keep in a small town and as word filtered out about the secret meetings, town residents were skeptical of becoming home to a experimental project that had never been used commercially anywhere in the world using coal as a feedstock.

When the annexation was passed in August 2017, one of the town board members told a local resident that he voted on it even though he knew nothing about it or the process it would use.

That set off alarms for several residents who were already concerned with high levels of various diseases in the area, especially since this was an experimental technology at the proposed size not far from an elementary school.

It did not take long for Dale residents to organize a new grassroots group using the moniker NOC2D or No Coal to Diesel. They sponsored public forums and started posting yard signs all over the small community in direct defiance of the Town Board which still acts as if the plant’s proposal is something that should remain as secret as possible.

LincolnLand and the sponsors  pledged to hold their own public information forums in April but four months later have, at best, offered private, invitation only affairs where they control who attends and who asks questions.

Meanwhile, the NOC2D group continues to organize in and around the town of 1.600 appearing at fairs and festivals where they have distributed more than 600 yard signs opposing the plant and collecting names for a push to stop it when the Indiana Department of Environmental Management issues a Title 5 and Construction permit to the sponsors. There is little doubt the permit will be issued since Indiana Governor Holcomb proudly had his picture taken with plant sponsor, Greg Merle last May at the US Embassy in Geneva. Switzerland during the time IDEM was supposed to be analyzing the veracity of the plant and its emissions on already beleaguered air quality in southwest Indiana. 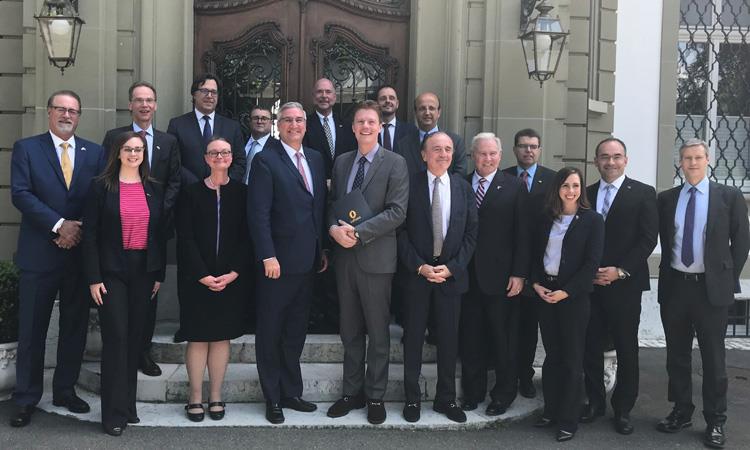 Indiana Governor Holcomb stands next to Riverview Energy President, Greg Merle at the American Embassy in Switzerland last May. Just why is Merle all smiles?

Of course problems they had in getting financing with their first chosen venue remain. Coal overall is experiencing hard times with mines and power plants shuttering across the globe due to expense and concern for climate change. It remains to be seen if a Connecticut coal man can convince enough financiers and bankers to invest in an experimental project sponsored by a family whose has never financed, built or operated anything like this anywhere in the world.

There are only two plants using this technology anywhere and both of them are connected with existing oil refineries and are most likely using petroleum coke as feedstock. The technology is called Veba Combi Cracker and only used in Russia and China. In the USA, at least, the tech is owned by the nefarious Kellogg Brown And Root or KBR. KBR’s most recent claim to fame in the Hoosier State ( https://www.propublica.org/article/kbr-under-fire-again-and-again-1204) is the lawsuit brought by sixteen members of the Indiana National Guard who assert KBR  knowingly exposed them to poisonous hexavalent chromium which causes cancer in humans ,while on duty in IRAQ shortly after the American invasion in 2003.

Then there is the issue of water. A pipeline will have to be built from an aquifer near the Ohio River twenty miles away to supply the reported 1.8 million gallons of water the plant will use daily. Riverview seems to expect the Indiana taxpayers to fund that perk for them as well as the waste water discharge pipeline for used water to be placed into the Ohio River which is used for drinking water in the nearest large town of Evansville that serves water needs for a population of close to 200,000 people.

It is clear, too, that using coal to create diesel fuel has been and will always be more expensive than refining crude oil and even used cooking oil to get the same product.  Coal to liquids has only worked when regimes has no access to crude oil because of international sanctions, i.e. Nazi Germany and apartheid South Africa

Just recently, the South African giant corporation SASOL, decided they would be exiting any new efforts to use coal to make liquid fuels although they are as close as anyone to making that a sound economic venture.  SASOL flourished in South Africa during apartheid because no one would sell liquid fuels to them under worldwide sanctions. Post apartheid, SASOL sought to sell their technology to other countries, including the USA, with limited success during periods when oil prices were rising rapidly.

In reality, there is only one way the Riverview plant will be built and that is with nearly 100% taxpayer subsidy. Perhaps, in his zeal to bring back coal, President Trump will ordain that US taxpayers should fund this uneconomic project but will those in Congress who consider themselves “conservative” allow for the complete socialization of risk and privatization of profit for a family of carpetbaggers from Connecticut?

That is a question eagerly awaiting an answer in pollution plagued southwest Indiana as citizens prepare for a fight for their lives and quality of life.