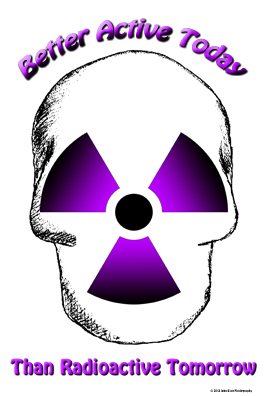 Wow, it was 10 years ago today that the disaster in Fukushima, Japan began. Sadly, it continues, dumping millions of gallons of radioactive contaminated water into the Pacific Ocean, endangering aquatic food supplies, for centuries to come.

For more than 70 years, the nuclear industry has told us their problems were transient and answers just around the corner while huge volumes of nuclear waste build up with no true solution in sight.

In 1977, the Hoosier National Forest, near Branchville, was proposed to be a major depository for high level nuke waste. To counter that we formed the predecessor to Valley Watch called the Nuclear Waste Action Committee that successfully fought that ridiculous proposal.

What followed was the formation of Valley Watch and we were part of a successful effort to stop the Marble Hill nuke near Madison. That was our first long term fight and lasted seven full years.

Today, we are being told that a new smaller reactor is the answer to energy needs, envisioning those small nukes being built in every locale that is gullible enough to buy into the prognostications of a discredited industry. One that refuses to go away even though they have a legacy of Fermi, Browns Ferry, Three Mile Island, Maxey Flats, Hanford, Chernobyl and Fukushima.

It should be clear to everyone that the nuclear industry is not to be trusted and we should all be “Better Active Today-Than Radioactive Tomorrow.”

Download this page in PDF format
This entry was posted in Uncategorized and tagged Fukushima, nuclear power, nukes, Valley Watch. Bookmark the permalink.