A severe storm blew through Evansville tonight at dusk leaving a number of trees and power lines down in its wake. This video, the first of regularly featured videos on this site shows the view from the front door of the Valley Watch office in near downtown Evansville.

When Crocus bloom, spring is just around the corner

February 17, 2007-by John Blair. A change of season is on the way when crocus bloom. these are the first to do so in the Valley Watch garden. This year, they are later than they were last year when the bloomed in the middle of January. Other signs of activity in the garden this week were a variety of small spiders and ants that emerged from below the ice and snow thart covered the ground last week. Those may have been a little premature since temps are supposed to drop into the low 20s Monday night.

Earth and Moon as seen from

March 4, 2008-NASA continues to give us dramatic pictures from space. This one posted by NASA yesterday shows both the Earth and our Moon as seen from Mars.

The High Resolution Imaging Science Experiment (HiRISE) camera would make a great backyard telescope for viewing Mars, and we can also use it at Mars to view other planets. This is an image of Earth and the moon, acquired on October 3, 2007, by the HiRISE camera on NASA’s Mars Reconnaissance Orbiter.

At the time the image was taken, Earth was 142 million kilometers (88 million miles) from Mars, giving the HiRISE image a scale of 142 kilometers (88 miles) per pixel, an Earth diameter of about 90 pixels and a moon diameter of 24 pixels. The phase angle is 98 degrees, which means that less than half of the disk of the Earth and the disk of the moon have direct illumination. We could image Earth and moon at full disk illumination only when they are on the opposite side of the sun from Mars, but then the range would be much greater and the image would show less detail. (MORE)
Go to Original 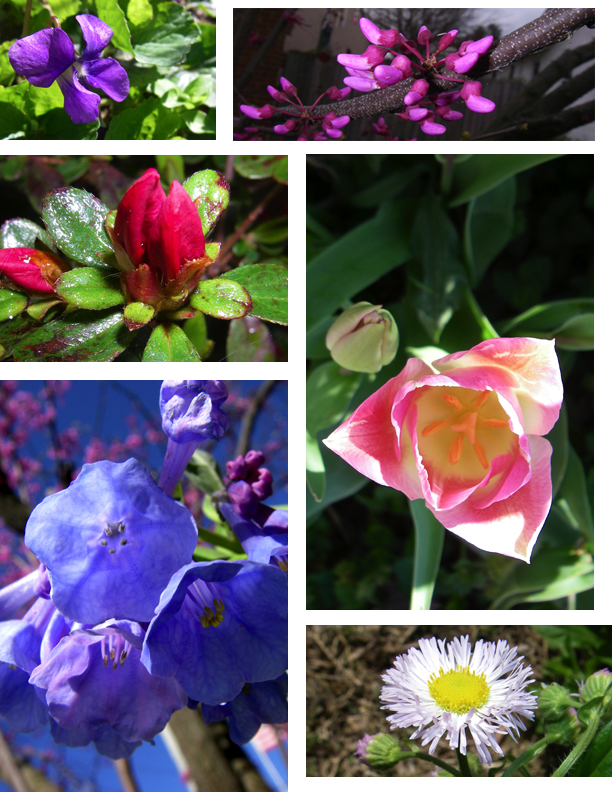 April 16, 2008- Spring is here and its colorful glory is evident in every direction. The Valley Watch garden has come alive. Photos © 2008 by John Blair, show clockwise from upper left: a violet growing close to the ground, redbud blooms, a small tulip, a prolific weed that looks like a miniature daisy, beautiful bluebells, and an azalea bud about to open.
Keep an eye on this page for more garden photos as we try to balance the ugliness of many of our stories with beauty from the garden.

First Bee shows up. Check out that pollen on its leg

Peace on the river

June 9, 2008-The Ohio River is peaceful at night, a great place to meditate and relax. Here a male Mallard duck swims in a highlight provided by one of the security lights at Evansville’s Inland Marina. Photo© 2008 John Blair.

Butterflies indicate an end to summer