Climate of Denial-Can science and the truth withstand the merchants of poison?

The first time I remember hearing the question “is it real?” was when I went as a young boy to see a traveling show put on by “professional wrestlers” one summer evening in the gym of the Forks River Elementary School in Elmwood, Tennessee.

Tiny Grandview, Indiana was one of many US communities that have experienced flooding of major proportions in 2011. The Ohio River in Evansville was above flood stage for weeks this Spring and flooding along the Mississippi, Missouri and other major Rivers has caused disruption in lives and property for millions of Americans. Severe weather events are becoming common and no region is immune. Photo © 2011 John Blair

The evidence that it was real was palpable: “They’re really hurting each other! That’s real blood! Look a’there! They can’t fake that!” On the other hand, there was clearly a script (or in today’s language, a “narrative”), with good guys to cheer and bad guys to boo.

But the most unusual and in some ways most interesting character in these dramas was the referee: Whenever the bad guy committed a gross and obvious violation of the “rules” — such as they were — like using a metal folding chair to smack the good guy in the head, the referee always seemed to be preoccupied with one of the cornermen, or looking the other way. Yet whenever the good guy — after absorbing more abuse and unfairness than any reasonable person could tolerate — committed the slightest infraction, the referee was all over him. The answer to the question “Is it real?” seemed connected to the question of whether the referee was somehow confused about his role: Was he too an entertainer? 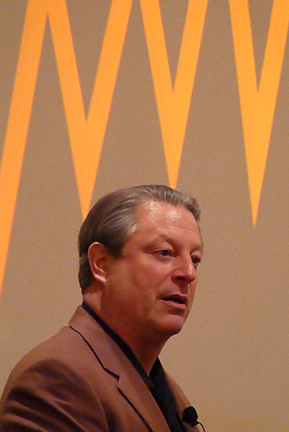 That is pretty much the role now being played by most of the news media in refereeing the current wrestling match over whether global warming is “real,” and whether it has any connection to the constant dumping of 90 million tons of heat-trapping emissions into the Earth’s thin shell of atmosphere every 24 hours.

This article appears in the July 7, 2011 issue of Rolling Stone. The issue is available on newsstands and in the digital archive on June 24.

Admittedly, the contest over global warming is a challenge for the referee because it’s a tag-team match, a real free-for-all. In one corner of the ring are Science and Reason. In the other corner: Poisonous Polluters and Right-wing Ideologues.

How Obama gave up on climate change legislation

The referee — in this analogy, the news media — seems confused about whether he is in the news business or the entertainment business. Is he responsible for ensuring a fair match? Or is he part of the show, selling tickets and building the audience? The referee certainly seems distracted: by Donald Trump, Charlie Sheen, the latest reality show — the list of serial obsessions is too long to enumerate here.

Download this page in PDF format
This entry was posted in Uncategorized and tagged Climate Change, deniers, Gore, RollingStone. Bookmark the permalink.