The Edwardport plant as seen from the air on Labor Day Weekend 2010. Photo © 2010 John Blair

In a shocking reversal of position, the Indiana Office of Utility Consumer Counselor (OUCC) has reversed its support for the Duke Energy Edwardsport power plant fiasco.

Just last November 3, OUCC head, David Stippler gave the plant and ratepayer support for it his glowing endorsement during a “technical hearing” before the Indiana Utility Regulatory Commission (IURC). On July 1, his office reversed that endorsement and said that ratepayers should no longer be on the hook for the massive cost overruns the construction of the beleaguered plant which is now said by Duke to cost more than $3 billion, a figure that does not include carbon capture and sequestration. 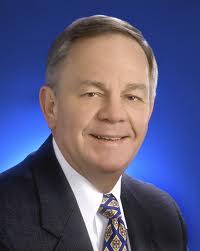 David Stippler, Indiana Utility Consumer Counselor had a change of heart and a change of direction regarding Duke Energy's Edwardsport power plant.

Since the plant’s inception in 2005, the OUCC has been a leading promoter of the plant, following the lead of Indiana governor, Mitch Daniels who has made the plant the centerpiece of what he calls “home grown energy,” since it will presumably use Indiana coal to fuel its electrical generation. At that time Duke claimed the plant would cost $1.2 billion and would incorporate carbon capture and storage technology within that cost.

In fact, last September, the OUCC entered into a “settlement” regarding the plant along with Duke and a group of Duke’s industrial customers that would have placed a cap on the costs that ratepayers would have been required to fund at nearly $2.9 billion. At that time, it was only the coalition of health, consumer and environmental advocates including Valley Watch, Save The Valley, Citizens Action Coalition and the Sierra Club that continued to stand in opposition to the plant. 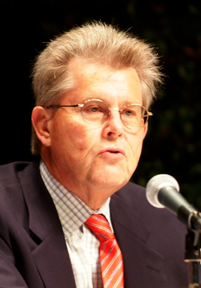 David Lott Hardy could face jail time for his cozy indiscretions with Duke Energy executives as revealed in numerous emails reviewed by the Joint Intervenors in the unfolding scandal. In the Energy Summit of Southwest Indiana, where this photo was taken, Hardy enthusiastically endorsed the Edwardsport project without having analyzed the evidence.Photo © 2007 John Blair

But shortly after the settlement was announced it began to fall apart as a major scandal developed surrounding Duke’s hiring of the Chief Administrative Law Judge for the IURC, Scott Storms. Storms had presided over numerous dockets regarding the Edwardsport plant and his employment by Duke set off a storm of protests and inquiries by private and public agencies, including the FBI, which led to the release of hundreds of emails which showed an extremely cozy relationship between Duke and the IURC and especially its chairman, David Lott Hardy, a former lawyer for Duke’s predecessor, Cinergy and Public Service Company Indiana.

Hardy, it seemed enjoyed taking advantage of Duke executive’s largess including not only expensive breakfasts at exclusive Indianapolis eateries with Duke CEO, Jim Rogers but also repeated social engagements with other Duke execs on their private yachts in Lake Michigan as revealed in publicly released emails.

After the cozy relationships become public knowledge, Hardy was fired by by Governor Daniels in an attempt at damage control since it has been clear that Daniels and Hardy were in lockstep concerning the Duke plant since it was first envisioned. In fact, the day after the public hearing on Edwardsport in late August 2007,  Hardy and Daniels both appeared at what was billed as and “Energy Summit” in Evansville giving their enthusiastic endorsement of the Edwardsport facility, well before the IURC had vetted the evidence presented during the hearing or during the formal IURC proceeding.

It was not until November, 2007 that IURC gave Duke the go ahead to force their Indiana customers to assume the risk of building the plant which opponents had very precisely warned would cost far more than the $1.9 billion the IURC approved.

All during this time, the Office of Consumer Counselor was also in lockstep with the Governor and Hardy on their promotion of the plant and remained so until last week when they issued their explosive testimony telling IURC they should no longer require Duke’s customers to pick up the cost of the massive overruns Duke had allowed to happen. In fact, in that testimony, they left open the possibility that Duke’s mismanagement and concealment might lead them to ask for ratepayer exposure to be even less than the $2.35 billion already approved by the IURC in March 2009.

OUCC’s position today is wondrously close to the position of the Joint Intervenors, the collection of consumer, health and environmental organizations that have warned of the exact scenario that has occurred with overruns and mismanagement since the very beginning of the Edwardsport fiasco. the main difference between the two positions at this time is that the Joint Interveners believe the plant is not needed now or in the future and that the 618 Megawatts of power the plant is to produce could be achieved less expensively and with less pollution through the adoption of strong demand side management techniques and efficiency measures instead of building baseline capacity.

In the past, the IURC has shown great deference to the position of the Office of Consumer Counselor. Time will tell if they decide to protect the interests of consumers over the interests of Duke Energy.

Among the testimony filed by the OUCC on the case on July 1 are the following quotes:

• “First, he OUCC supported withdrawal of the Agreement ( settlement) because it learned that DEI had improper ex parte communications with the then-chairman of the Commission during the negotiations. This fact raised the possibility that DEI had not negotiated the settlement in good faith.”

• “Duke has not demonstrated any budgetary constraints on this project. There appears to be a lack of responsibility or accountability on the part of those causing these multi-million dollar cost overruns… The escalating costs have been borne solely by ratepayers, with the benefits going to the shareholders.”

• “There is little incentive for Petitioner to be cost conscious since the risk of cost overruns is borne solely by the ratepayers… Consumers should not be required to support additional economic burdens due to unjustifiable project changes.”

• “Rejection of Petitioner’s request IS warranted because Duke has failed to demonstrate that the requested project cost increase from $2.35B to $2.88B is prudent. Duke should no longer have a direct and endless line of project funds supplied solely by the ratepayers. Duke shareholders should bear some of the risks.”

• “Our recommendation that Duke be denied any cost recovery over $2.35B should not be interpreted to mean that the OUCC believes Duke is entitled to recover all costs up to $2.35B. Our testimony in this Phase only addressed cost recovery between $2.35B and $2.88B. The OUCC reserves the right to argue in Phase II, which addresses Duke’s conduct since the inception of this project, that Duke is  entitled to considerably less than $2.35B.”