Is the sun setting on “clean” coal

Carbon Capture and Sequestration might soon be nothing more than a relic in a “might have been” history book.

Is the sun setting on so called "clean coal?" The answer to that became clearer this week as two set backs occurred. Shown is a picture taken July 16 of Duke Energy's now $3 billion Edwardsport IGCC plant that is under greater scrutiny due to scandal and huge cost overruns. Photo © 2011 John Blair

Most people who have studied the issue easily understand that coal is not clean and really cannot be made so, but that does not keep those who make big money mining and burning the black mineral from making those dubious claims.

But of course governments at all levels, still readily support nearly any proposal that describes itself as “clean coal” with massive taxpayer subsidies and lax permitting and enforcement in hopes that perhaps someday, coal might be consumed in ways that society will finally find acceptable. 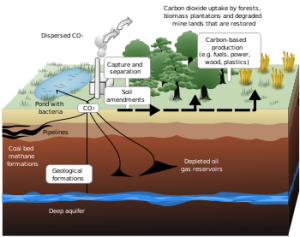 Sadly, every time promoters shout “clean,” the facts fail them.

The latest incarnation of the term says that coal can be made clean if they can utilize something that has this far, only existed in the greedy dreams of coal mine and power plant owners, Carbon Capture and Sequestration or CCS for short.

Lately though, those dreams have been more closely a nightmare.

Two events happened this week that sent CCS spiraling down as an option to keep coal as a viable energy option in the future.

Since the beginning of this century, CCS has been touted as the savior of coal since the idea was to use yet fully developed technology to “capture” carbon dioxide (CO2) emissions from burning or converting coal and then “sequestering” that carbon deep below the earth’s surface in rock formations where it would be stored for eternity.

First, bad news for CCS came when American Electric Power (AEP) announced they were ditching their multi-year very expensive experiment to capture CO2 from a conventional pulverized coal plant in West Virginia. According to AEP, the project “doesn’t make economic sense…” even though the US Department of Energy had given AEP $334 million subsidy to prove the CCS system viable in 2009.

AEP dropped the project in its second phase since it had gained success in a small demonstration project at their Mountaineer power plant for about two years. AEP’s admission that it cannot be justified economically reflects the fact that when the experiment was first started it was generally accepted that there would be a price placed by Congress on emissions of CO2 through a “cap and trade” program that was then considered imminent.

Of course, today, Republicans in Congress are doing everything they can to eliminate existing rules that call for eliminating coal emissions and have sworn to disallow anything that deals with trying to quell climate changing CO2 pollution.

Hopes for new-tech answers fades due to massive cost overruns from $1.2 billion to $3 billion.

CCS promoters suffered an even greater set back at the end of the week when testimony was filed by the Indiana Office of Utility Consumer Counselor (OUCC)declaring that Duke Energy had committed “gross mismanagement” and “concealment” in their quest to build the ill-fated Edwardsport Integrated Gasification Combined Cycle  (IGCC) experimental plant in Indiana.

Reasons that this event will make things more difficult for supposed clean coal are numerous but also mainly economic.

When Duke first made the political rounds in Indiana to sell their project to policy makers, they claimed the plant would cost $1.2 billion and include CCS. They secured not only political support from the legislature and Indiana pro-coal governor, Mitch Daniels as well as regulatory support to pass along the costs and the risk of building their 630 megawatt test plant.

By the time the Indiana Utility Regulatory Commission approved that arrangement in November 2007, the cost had ballooned to $1.985 billion without CCS. Instead of making it “clean coal” as they had earlier clamed, they wanted only to study their options for capturing and storing a mere 20%the CO2 from the plant that will amount to more than 5 million tons each year.

At first, they received an additional $15 million from ratepayers to do a cursory study on burying it on the plant site they had earlier claimed was a geologically “good” prospect. What they found was that the site was not good at all and in fact the Mt. Simon sandstone they had intended to use was not sufficiently “porous” to handle the massive volume produced during the 30+ year life the plant was supposed to last.

When that effort failed, Duke asked the IURC for an additional $120 million to study the prospect even further. That request is still pending and in a meeting last December with Valley Watch, Duke CEO, James Rogers, one of the worlds most known shills for CCS stated that he expected the “Federal Government” to pay for CCS at the plant and that he was meeting with the President to discuss just that later that month.

They had already applied for financial support from the Feds, claiming that CCS would cost them and additional $1.18 billion while the plant cost rose from $1.985 to $2.35 billion during that period. Their projected cost for CCS was inline with numerous earlier estimates by DOE to outfit an IGCC plant. As early as 2003, DOE had estimated that incorporating CCS into a new IGCC would cost an additional 50% capital expense.

Not only does the cost of building such a plant with CCS cost a considerably  more, most estimates indicate that using CCS can consume anywhere from 25-40% of the energy the plant produces, thus increasing the cost of producing electricity significantly.

In testimony this week regarding the latest effort by Duke to recover yet an additional $500 million from ratepayers because of cost overruns, the Consumer advocate office said that Duke Energy Indiana had concealed important facts about the real cost of the plant from regulators and also had “grossly mismanaged” the construction of the plant, a view shared by the Joint Interveners, including Valley Watch has taken for some time.

That testimony, if accepted by the IURC would make it so Duke could only make ratepayers responsible for the original $1.985 billion and force Duke to absorb around $1 billion of plant construction fees presumably paid for by the company’s stockholders.

It is now clear that Duke is highly unlikely to even make the attempt to recover an additional 50% in capital costs to actually make the plant as “clean” as they claimed when they gathered political support to force ratepayers to assume the risk of building the largest IGCC plant ever built.

Now that the plant is projected to be $3 billion it has also already seen a reduced capacity to 618 megawatts. That puts it on track to be the most expensive plant per unit of any coal-based plant in the world at $4,854,368 per megawatt capacity. Add another 50% to that figure for CCS and reduce the capacity by 25% to power the CCS and the net cost for the plant rises to a whopping $9,698,275 per megawatt, a figure never even conceived in serious discussion of power production.

Carbon Capture and Sequestration was touted as the savior of the coal industry but so far it has failed nearly every test to which it has been exposed. It is physically difficult to do, it costs an enormous amount of money, it takes an equally huge amount of energy to accomplish.

If the coal industry and their supporters in government think they can just rely on the largess of government to bail them out of these problems, they might want to consider that the Federal government does not seem to be in a big spending mode, especially for established industries like coal that was already mature more than a half century ago.

As new and old coal’s cost increases almost exponentially, it needs to be placed in perspective with renewable energy like wind and solar photovoltaics which is rapidly reducing in cost as the rest of the world embraces free fuel solar energy which is likely to continue reductions in cost.

It could be that real economic facts will mean nothing as powerful coal interests work their way with Congress and might even get Congress to force taxpayers to pay so that coal can survive and flourish while programs for the poor and sick are cut to pay for it. But if that happens, we will all lose because by doing that, it will set the US in a second class status when it comes to entering the age of renewable energy that is gaining ground throughout the rest of the planet.

2 Responses to Is the sun setting on “clean” coal