August 11, 2011-by John Russell in the Indianapolis Star 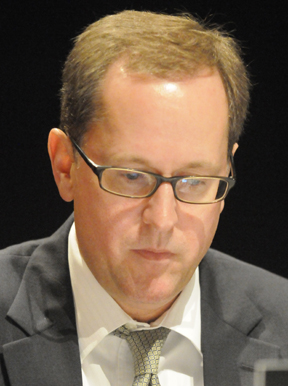 James Atterholt, current chairman of the Indiana Utility Regulatory Commission, may be the latest casualty of the on-going and growing scandal regarding Duke Energy due to emails uncovered by the Indianapolis Star that show him to have questionable ethics behavior in dealing with Duke. This photo of Atterholt shows him at a hearing regarding Duke's most recent $500 million rate increase hearing on February 28 this year in Columbus. Photo © 2011 John Blair

Energy Corp., recommending “confidentially, just between you and me” that the utility hire his personal choice as president of its Indiana operations.

James Atterholt, chairman of the Indiana

Utility Regulatory Commission, wrote that the hiring decision was “none of my business,” but he hoped the company would consider his candidate, then a lobbyist for Duke.

The Indianapolis Star obtained the email, along with scores of others to and from Atterholt, in an open-records request and from other public documents. In addition to lobbying Duke on a personnel matter, Atterholt:

Met privately for lunch and dinner with Duke executives, including James Rogers, the company’s chairman and chief executive, while the company had numerous issues pending before the commission.

Is characterized in an email by a Duke executive as giving his blessing to the company’s controversial hiring of the commission’s top lawyer and chief administrative law judge, Scott Storms.

Regularly sent warm notes to Duke executives, inviting them to call him “at any time” for help.

and state regulators. At the time, the utility was seeking permission to have consumers foot the bill for nearly $1 billion in cost overruns at its massive new power plant in Edwardsport.

Critics of Duke and of the IURC say the findings are further evidence that a cozy relationship still exists between regulators and utilities, jeopardizing the integrity of a process designed to protect the public.

Last fall, Atterholt’s predecessor, David Lott Hardy, was fired by Gov. Mitch Daniels in an ethics scandal involving Duke. Atterholt, the most junior member of the IURC, was given Hardy’s job in what was widely seen as a move to restore the integrity of an agency that regulates $14 billion worth of utility services.

Last week, Atterholt defended his conduct, saying he was just trying to build good relationships with utilities, consumer groups and industrial customers so he could understand their views. He denied having crossed any ethical lines.

“It is important to build relationships and to foster an environment where these views are respected and heard,” he said in an email to The Indianapolis Star.

But the new revelations come at a dicey time, as Duke is fighting with its largest customers and consumer groups over whether it committed fraud, concealed important facts or committed gross mismanagement in building its controversial Edwardsport power plant.

Last month, the state’s office of utility consumer counselor recommended that Duke swallow all the cost overruns on the project. It also accused the company of gross mismanagement and of concealing vital information about the plant from regulators.

The massive $3 billion coal-gasification plant — one of the most expensive projects of any kind in Indiana history — has suffered numerous construction and engineering setbacks, resulting in several huge rounds of cost overruns. Duke has argued that it has managed the project prudently and should be allowed to pass the cost overruns to ratepayers.

Atterholt’s job is critical, as head of an agency that is trying to sort out whether Duke engaged in improper behavior. But a glimpse of his emails over the past year raise questions about whether he has kept the arm’s-length relationship with Duke that is normally expected of regulators.

The commission regulates about $14 billion a year in rates paid by Indiana consumers for electricity, water, natural gas, steam and sewer utilities.

In an email to Duke in April 2010, when he was a junior member of the IURC, Atterholt urged the company to consider Julie Griffith, a longtime lobbyist for Duke Energy, as president of its Indiana operations, a position that was open due to a promotion of the previous president, James Stanley.

“It is certainly none of my business but I would like to confidentially, just between you and me, put in a kind word for Julie Griffith to fill that void,” Atterholt wrote in the email. “She is a first class representative for your company and is highly respected by all who know her here in Indiana. Just had to get that off my chest — she would kill me if she knew I was writing you. If you decide to go another direction for whatever reason, please know that person will have my full support.”

Atterholt sent the note to James Turner, then Duke’s second-highest-paid executive, who was in charge of regulated electric operations in five states. Turner, who had a big say in who would fill the job, thanked Atterholt for the suggestion and said he would consider it.

“It’s an intriguing idea that I’ve had in the back in of my mind,” he wrote, “but your strong endorsement suggests maybe I should move it closer to front of mind.”

A few minutes later, Atterholt sent an email to Griffith: “Julie, Do you have a personal email address? There is something I would like to pass along.” He then passed along Turner’s response to him.

Several ethics experts, consumer advocates and customers said that raised questions over whether Atterholt compromised himself.

“It’s really inappropriate for a regulator to get involved in personnel decisions with a utility,” said Judy Nadler, a senior fellow in government ethics at the Markkula Center for Applied Ethics at Santa Clara University in California, and the former mayor of Santa Clara, who frequently dealt with regulators concerning the city’s electric utility, Silicon Valley Power.

She said regulators should always keep a professional distance from utilities, and any conversation about personnel decisions could raise concerns of favoritism and back-scratching. For example, a utility that receives a note from a regulator pushing a candidate for a job might feel pressured to go along for fear of antagonizing the regulator. On the other hand, a utility that goes along with such a recommendation might expect to get favors in return.

Atterholt defended his actions, saying he had known Griffith since 1999, when he was a member of the Indiana General Assembly and she was a lobbyist for Duke.

“She is well known for her impeccable integrity and expertise on utility issues by members on both sides of the aisle,” he wrote in an email to The Star.

When asked whether getting involved in a utility’s personnel decisions was appropriate for a regulator, Atterholt said he did not “normally interject myself into such matters.” He added that Griffith did not lobby the IURC while at Duke.

“Those were very unique times,” he wrote. “There were strong rumors that then Chairman Hardy was pushing a candidate for the job at Duke. My recommendation of Ms. Griffith was intended to send a message to the leadership at Duke that the Commission was not unanimous in its support of whomever Chairman Hardy was pushing. Furthermore, it should be the company’s decision, not anyone in leadership at the IURC.”

When asked whom Hardy was “pushing,” Atterholt said he “honestly did not know who his candidate was.”

Griffith, for her part, said she never applied for the position, nor was she interviewed for the job. She left Duke in May to become vice president for public affairs at Purdue University.

She said Atterholt’s intentions were “honorable.”

“I can’t imagine he was trying to influence an internal decision. I just think he perhaps thought my capabilities might match the duties of the president of the company,” she said.

It’s unclear whether Turner gave any further consideration to Atterholt’s suggestion. The job eventually went to Michael Reed, a former executive director at the IURC and former commissioner of the Indiana Department of Transportation, who had known Hardy and Turner for several years.

But Reed did not last long at Duke. Less than five months later, the utility fired him, along with Storms, both casualties of the ethics scandal.

In December, Turner resigned after The Star reported he had sent hundreds of compromising emails to Hardy at the IURC.

Other emails between Atterholt and Duke, also obtained by The Star, paint a picture of a regulator interested in maintaining a close relationship with the giant utility.

On Sept. 1, 2009, a few months after joining the commission, Atterholt had dinner with Rogers, Duke’s chairman and chief executive, at the Capital Grille, an upscale restaurant near the Indiana Statehouse. A few days later, Hardy, then chairman of the IURC, sent an email to Turner: “Rogers/Atterholt evening went well — they should be able to work together.”

Atterholt, when asked about the get-together, called the dinner “social in nature.” He said the conversation did not involve any discussion of personnel issues or pending regulatory matters. He said he paid his own way and attended the dinner at the request of Hardy. State law prohibits utilities and other interested parties from engaging in private communication with regulators on any issue pending before the IURC.

In later emails to Reed, Stanley and other Duke executives, Atterholt routinely encouraged them to call him if he “could be of help.”

Another email suggests that Atterholt knew about Storms’ decision to leave the IURC for Duke and supported it. On July 27, 2010, Reed sent an email to Turner on the subject.

“Discussion with Atterholt went very well,” Reed wrote. “He totally supports Scott joining Duke and very much appreciates my calling him in advance. No problem to proceed.” He also sent a similar email to Hardy at the IURC.

Storms, a longtime lawyer at the IURC, quit his job in September to work as a lawyer for Duke, without a one-year cooling-off period as required under Indiana ethics law.

The move touched off a cascading ethics scandal that cost several people their jobs, including Storms himself. The state ethics commission later ruled that Storms broke laws by participating in cases at the IURC involving Duke Energy Corp. while talking to the company about a job. The ethics panel fined him $12,000 and barred him from future state employment.

Atterholt called Reed’s comments a “gross exaggeration” of the facts and “self-serving.” He acknowledged that he had talked with Reed about Storms last summer but denied that he knew about Storms’ plans to leave the IURC for Duke. He said Reed had merely asked about Storms’ ability as a lawyer.

“I provided a generic response, not knowing at the time the context in which it was being asked,” Atterholt wrote in an email to The Star. “Further, I was not advised of Duke’s ongoing contacts with Mr. Storms nor did I know the extent former Chairman Hardy was involved in those conversations.”

Jane Jankowski, a spokeswoman for Daniels, declined to respond.

Some consumer advocates now say that Atterholt’s secret emails raise new alarms about the relationship between the IURC and Duke.

“Atterholt is supposed to be the guy that was brought in to straighten this whole mess out,” said Julie Vaughn, president of Common Cause/Indiana. “This is really disappointing.”

“I think it’s another indicator of how flawed the system is,” said Kerwin Olson, interim executive director of Citizens Action Coalition of Indiana, a longtime critic of Duke and the IURC. “The line between a regulator and utilities is so blurred it’s almost nonexistent.”

Yet some are willing to give Atterholt the benefit of the doubt.

Tim Stewart, a lawyer for Lewis & Kappes, which represents large industrial customers of Duke Energy, said although he was concerned that a cozy relationship between a utility and the IURC could result in unbalanced regulatory decisions, he gave a vote of support to Atterholt in this case.

“We have confidence that Chairman Atterholt will fairly resolve issues at the IURC based on the evidence in the hearing room,” he said.

Download this page in PDF format
This entry was posted in Uncategorized and tagged Duke Energy, Edwardsport, Indiana, IURC, Scandal. Bookmark the permalink.