EPA proposed a strengthening of the annual National Ambient Air Quality Standard for fine particles, which depending on exactly how the rule is interpreted, could force much of the Ohio Valley, including southwest Indiana to be placed into non attainment of the standard and thus restricting the types of industries that could be built in the region.

EPA is proposing and taking comment on a new standard ranging from 13 µg/m3 (micrograms per cubic meter) down to 12 µg/m3 and will take comment on the range before issuing a final standard by December 14 this year.

Just last September, EPA, at the Indiana Department of Environmental Management’s request “redesignated” the SW Indiana region to “attainment” of the 1997 annual standard which was set at 15 µg/m3. In that determination, EPA said that data showed that after various new pollution control rules levels in the SW Indiana region would exceed either level at which EPA proposed today. (See Chart Below)

Fine particles have been proven to be a serious health problem, causing maladies such as, cancer, asthma, heart disease, stroke and respiratory problems and indeed can cause 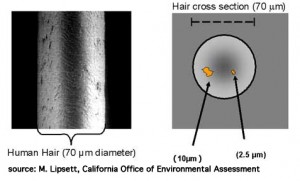 death to people prone to these diseases.

According to EPA’s press release, “because reductions in fine particle pollution have direct health benefits including decreased mortality rates, fewer incidents of heart attacks, strokes, and childhood asthma, these standards have major economic benefits with comparatively low costs. Depending on the final level of the standard, estimated benefits will range from $88 million a year, with estimated costs of implementation as low as $2.9 million, to $5.9 billion in annual benefits with a cost of $69 million – a return ranging from $30 to $86 for every dollar invested in pollution control.”

The proposed changes, which are consistent with the advice from the agency’s independent science advisors, are based on an extensive body of scientific evidence that includes thousands of studies – including many large studies which show negative health impacts at lower levels than previously understood.

EPA will accept public comment for 63 days after the proposed standards are published in the Federal Register. The agency will hold two public hearings; one in Sacramento, CA. and one in Philadelphia, PA. Details on the hearings will be announced shortly. EPA will issue the final standards by December 14, 2012.