It is truly a sad day for people in the tri-state of Illinois, Indiana and Kentucky. The District Circuit Court of Appeals in Washington struck down an EPA rule designed to improve the health of citizens of this region and all of the eastern half of the nation. The judges were split 2-1 with an angry 44 page dissent from Judge Judith Rogers. 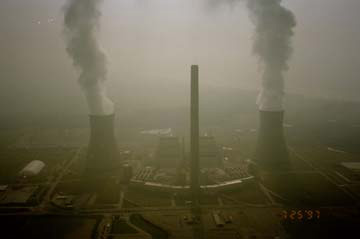 AEP’s Rockport power plant should not be impacted by the Court’s ruling today since it is already under a court order to install scrubbers on both of its 1300 megawatt units by 2018. Other power plants in the region might be impacted however, and continue to operate without pollution controls for years to come if the DC Court’s ruling is allowed to stand. Photo © 2003 John Blair.

Called, the Cross State Air Pollution Rule, the rule was finalized in July 2011 to force coal burning power plants to install pollution controls for sulfur dioxide and nitrogen oxides that, in turn, would significantly reduce the formation of fine particle pollution in the form of sulfates and nitrates across much of the United States.

When EPA published the rule it said it would result in a 73% reduction in SO2 emissions by 73% and NOX emissions by 54% improving the overall health of more than 240 million Americans.

“This decision allows harmful power plant air pollution to continue to aggravate major health problems and foul up our air. This is a loss for all of us, but especially for those living downwind from major polluters,” said John Walke, clean air director at the Natural Resources Defense Council.

“This rule would have prevented thousands of premature deaths and saved tens of billions of dollars a year in health costs, but two judges blocked that from happening and forced EPA to further delay long overdue health safeguards for Americans.”

“The EPA can – and should – immediately appeal this decision. The dissenting judge correctly follows the Clean Air Act and prior rulings by this court. The majority opinion is an outlier at odds with the court’s own rulings as well as the Clean Air Act,” Walke said.

The same court with differing judges had already struck down the Clean Air Interstate Rule in 2008 but on both occasions told EPA to continue acting as if the CAIR rule was still in effect.