October 28, 2012-by Mike Jarmus in the Ft. Wayne Journal Gazette

You might not have, but the Indiana state government has signed a deal to potentially pass down the loss to taxpayers and natural gas users alike. Tracy Warner’s Oct. 2 column, headlined “A costly natural gas deal,” brought to light this little-known contract agreement. Lawmakers may have initially had great cost-effective intentions while brokering this agreement, but currently this deal will be extremely costly to all. 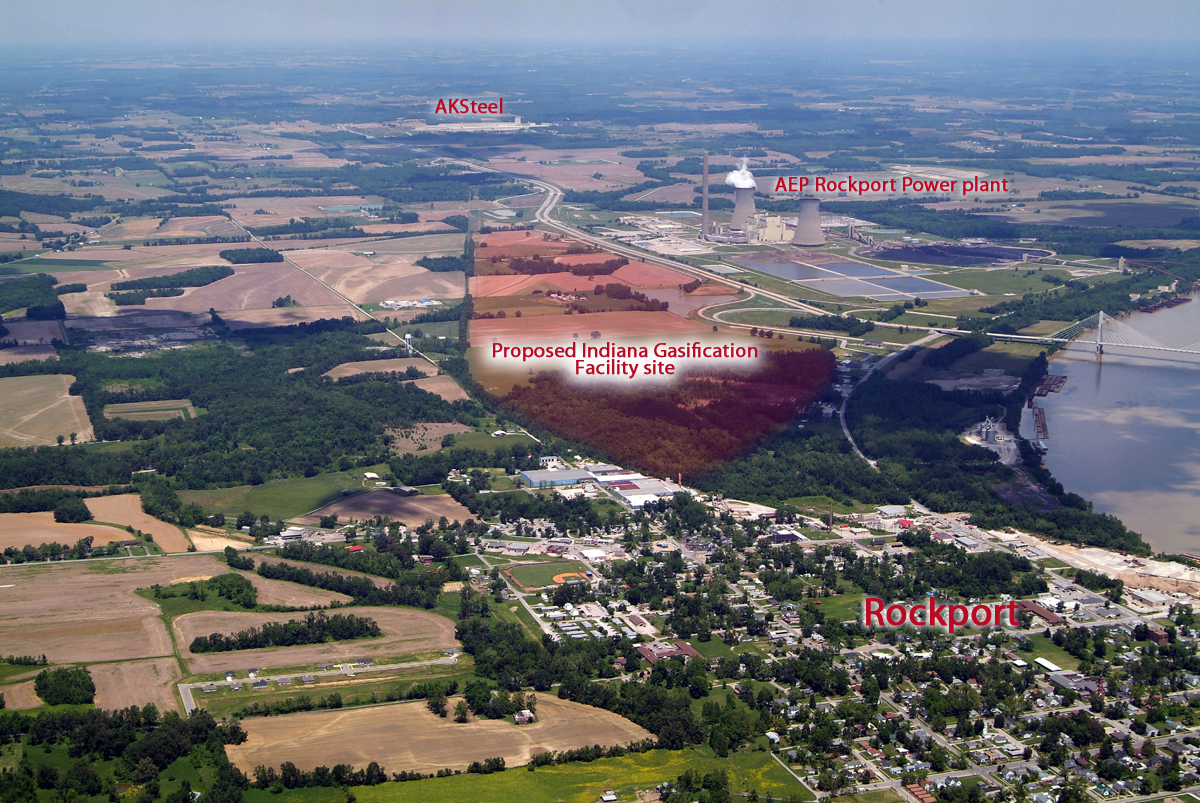 Rockport, Indiana is already one of the most toxic polluted towns in the world. The proposed plant will sit just across the highway from two existing industries that already emit more than 30,000,000 pound of toxic chemicals. If Environmental Justice means anything, the federal Government will not issue a $3.5+ loan guarantee to Indiana Gasification which is required in addition to forcing Indian taxpayers and ratepayers to assume the substantial risk and pay a 2-300% premium just for the privilege of getting their home heating gas from coal. Aerial Photo © 2011 John Blair.

Four if not five years ago, $6.60 per 1 million BTUs of natural gas that the state agreed to purchase was a fair price. However, with the recent natural gas boom in the United States, this is no longer true.

The advancements the industry has made in extraction methods, such as fracking, have made once hard-to-reach natural gas accessible. Along with last year’s warm winter, this has created a surplus in natural gas and forced a record-breaking decrease in prices.

These record lows can be seen with the average natural gas price being only $2.63 to this point in 2012. The markets have been on a slight rise recently, but October’s price settled at $3.02. The price in the foreseeable future will not be coming anywhere close to the $6.60 price that the state will be paying.

These numbers might not seem very large. What does a couple of dollars matter when you receive 1 million BTUs of natural gas? Well, when you take into consideration that the U.S. Energy Information Administration showed in its latest numbers that Indiana used a little more than 5.61 trillion BTUs in 2010 alone, it adds up.

In Warner’s column, Vectren stated that by its estimates, losses could come to $1 billion, while the opposing view by industry spokesman Mark Lubbers stated this number was “absurd.” Upon looking further into these estimated losses, I fully agree with Vectren’s estimate and believe it might actually be underestimating the potential losses.

If this deal was initiated at the start of 2012 and if Indiana’s natural gas usage has had a modest increase since 2010, my estimates show the state could actually have had a staggering loss of almost $2.5 billion for this year alone.

Take note that this contract is for a 30-year span as well.

Those losses are on the upper end of my estimates, but several factors will play into to the real amount taxpayers and natural gas users will have to foot in the future. These factors will include the quantity of natural gas the state is locked into purchasing a year, how much of this gas the utility companies will be forced to be use and how long it will take either to renegotiate or break this costly contract.

The real cost to you is still up in the air. You may not have signed the contract, but you will in the end be responsible for paying for it even if you do not use natural gas.

Mike Jarmus, who grew up in Fort Wayne, is an energies analyst with Big Apple Energy, LLC, which specializes in natural gas and electricity in the greater New York City area. He wrote this for The Journal Gazette.