Most energy subsidies go to fossil and nukes, not clean energy as the corporatists would have you believe

November 7, 2012-by Daniel B. Botkin in E-The Environmental Magazine

A persistent and common criticism of solar and wind energy is that they don’t pay their own way, but require government subsidies.  Discounting one-time allocations under the now infamous bailout funds, the reality is just the opposite: fossil fuels, nuclear power, and crop biofuels have been getting larger federal subsidies than solar and wind.

Most critics are unaware of this. For example, Republican presidential candidate Mitt Romney writes in his Energy Policy that “wind and solar power, two of the most ballyhooed forms of alternative fuel, remain sharply uncompetitive on their own with conventional resources such as oil and natural gas in most applications. Indeed, at current prices, these technologies make little sense for the consuming public but great sense only for the companies reaping profits from taxpayer subsidies.”

Reason magazine has made a particular point of condemning solar and wind for the same reason.  For example, Scott Shackford, an associate editor of Reason, wrote on August 10, 2012: “This week the Department of Defense announced it would open up 13 million acres of public land for renewable energy development. How much of that will require government subsidies of manufacturers to actually happen?”

The amount spent on wind and solar is a pittance. The lion’s share of subsidy dollars actually goes to non-renewable energy. A study by the Environmental Law Institute, Estimating U.S. Government Subsidies to Energy Sources: 2002—2008, shows that during that period traditional fossil fuels received $70.2 billion in federal subsidies, whereas corn ethanol received $16.8 billion, and “traditional renewables,” which include solar and wind received, $12.2 billion, 17% of the amount received by fossil fuels.

A report by the Department of Energy’s own Energy Information Agency, Direct Federal Financial Interventions and Subsidies in Energy in Fiscal Year 2010, showed that in 2010 solar energy received $1.134 billion in federal subsidies; coal $1.358;  natural gas and petroleum $2.820; nuclear $2.499; wind $4.986; and biofuels (mainly corn ethanol) $6.644.  In short, fossil fuels and nuclear together received $6.677 billion in direct subsidies, while solar and wind together received $6.120 billion. 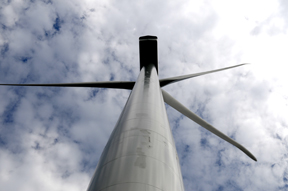 In addition, there is a major difference in the way the direct federal subsidies help nonrenewables and renewables.  According to the Environmental Law Institute, “Most of the largest subsidies to fossil fuels were written into the U.S. Tax Code as permanent provisions. By comparison, many subsidies for renewables are time-limited initiatives implemented through energy bills, with expiration dates that limit their usefulness to the renewables industry.”

What I have pointed out so far are direct subsidies, but there are many kinds of indirect subsidies — ways that producers of a specific kind of energy receive government benefits.  For example, under the George W. Bush administration, the federal budget included $10-$11 billion a year to manage nuclear wastes, which no longer exists under the Obama administration.  Funds to manage these wastes are an absolute necessity, but are not usually counted as subsidies.  Considering what happened in 2011 in the Japanese Fukushima Dai-ichi nuclear power plant, it is worthwhile to know that no private insurance company will insure a U.S. nuclear power plant.  Who pays for any damages?  We do, all of us taxpayers, because the federal government is the source of last resort for any compensation of major damages from nuclear power.

As for fossil fuels, according to the Environmental Law Institute, in addition to direct subsidies, “The vast majority of subsidy dollars to fossil fuels can be attributed to just a handful of tax breaks, such as the Foreign Tax Credit ($15.3 billion) and the Credit for Production of Nonconventional Fuels ($14.1 billion).”

Corn-based ethanol receives a variety of indirect subsidies, such as a much lower cost of water to irrigate crops than we pay for domestic water use.  When I was researching a report for the city of Los Angeles in the 1980s, that city was paying more than $300 an acre-foot for water. At the same time, the big agriculture companies were growing cotton, rice, alfalfa, and other heavily water-dependent crops at water costs of a few dollars an acre-foot.

Today, a recent USDA report states that “irrigation water costs for groundwater
averaged $32 per acre and off-farm surface water about $41 per acre.” Meanwhile, the city of San Diego just announced that it will be buying all the water from a new desalinization plant, at a cost of $2,042 to $2,290 per acre-foot, and that this is “more than twice what it pays to buy water from outside the region.”

DANIEL B. BOTKIN, Ph.D., is the author of The Moon in the Nautilus Shell: Discordant Harmonies Reconsidered (Oxford University Press) and Professor Emeritus, Department of Ecology, Evolution, and Marine Biology, University of California, Santa Barbara