Researchers at Rice University in Houston have found a direct correlation between out-of-hospital cardiac arrests and levels of air pollution and ozone. Their work has prompted more CPR training in at-risk communities.

Rice statisticians Katherine Ensor and Loren Raun announced their findings today at the American Association for the Advancement of Science (AAAS) conference in Boston.

Their research, based on a massive data set unique to Houston, was published this month in the American Heart Association journal Circulation. 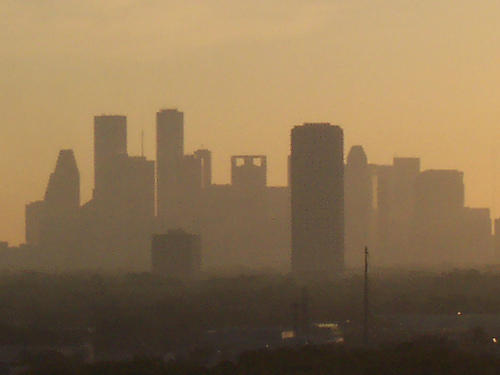 Houston’s air is often smoggy, even more so than Evansville’s, giving it the dubious distinction of being 8th most polluted city n America, according to the American Lung Association for high ozone days.

They found a positive correlation between OHCAs and exposure to both fine particulate matter (airborne particles smaller than 2.5 micrograms) and ozone.

The researchers found that a daily average increase in particulate matter of 6 micrograms per day over two days raised the risk of OHCA by 4.6 percent, with particular impact on those with pre-existing (and not necessarily cardiac-related) health conditions. Increases in ozone level were similar, but on a shorter timescale: Each increase of 20 parts per billion over one to three hours also increased OHCA risk, with a peak of 4.4 percent. Peak-time risks from both pollutants rose as high as 4.6 percent. Relative risks were higher for men, African-Americans and people over 65.

For the study, OHCA events were defined as cases where EMS personnel performed chest compressions. Ensor and Raun noted the patients died in more than 90 percent of the cases, which occurred more during the hot summer months (55 percent of total cases).

The researchers also looked at the effects of nitrogen dioxide, sulfur dioxide and carbon monoxide levels, none of which were found to impact the occurrence of OHCA.

The work is expected to help Houston EMS fine-tune its deployment of personnel and equipment and provide early warnings to health officials and the public when weather and/or incidents warrant an alert for high ozone levels in specific areas, Ensor said.

Co-author David Persse, Houston Fire Department EMS physician director and a public-health authority for the city, said it’s long been thought by EMS workers that certain types of air pollution, including ozone, have significant negative effects on cardiac and respiratory health. “But this mathematically and scientifically validates what we know,” he said.

Houston is already acting upon the results.

“The city has targeted educational resources to at-risk communities, where they’re now doing intensive bystander CPR training,” Raun said. Early intervention is seen as critical, as the chance of survival for a person suffering cardiac arrest drops 10 percent for every minute he or she is left unattended. She said statistics show one life is saved for every 26 to 36 people who receive cardiopulmonary resuscitation from a bystander.

Houston’s effort is part of a range of interventions to mitigate the consequences of poor air quality days, though none are substitutes for the primary strategy of improving air quality, according to the city’s Health and Human Services Department.

Cohan’s talk focused on uncertainties in estimating the health benefits that will result from efforts to control ozone pollution. Ozone itself cannot be controlled, he said, as it forms from several precursors. Cohan’s research has shown that reducing nitrogen oxide emissions is typically the most effective way to control summertime peak afternoon ozone, but may be less effective than hydrocarbon emission reductions at other times.

Ozone standards focus on peak conditions, but some epidemiological studies show that substantial health benefits can also result from reducing ozone at other times, he said. Thus, emission-control strategies aimed solely at achieving regulatory standards may not yield as great a health benefit as strategies that reduce ozone year-round. This research has important implications as states aim to attain national ozone standards. The standards are now set at 75 parts per billion (ppb), but the EPA is considering tightening them to a level in the 60-70 ppb range.

A 2012 study by Raun and Ensor published by Rice’s Baker Institute for Public Policy determined that, overall, the current EPA standard for ozone serves its purpose, while the particulate standard of 35 micrograms per cubic meter does not.

“The bottom-line goal is to save lives,” Ensor said. “We’d like to contribute to a refined warning system for at-risk individuals. Blanket warnings about air quality may not be good enough.

“At the same time, we want to enhance our understanding of the health cost of pollution – and celebrate its continuing reduction.”

The Houston Endowment and city of Houston funded the study led by Ensor, Raun and Persse. Arturo Blanco, chief of the Bureau of Pollution Control and Prevention, Houston Department of Health and Human Services, supported the research.