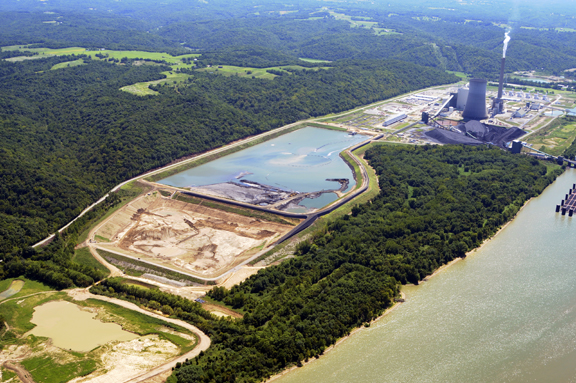 LG&E’s Trimble power plant dominates the region with its giant stacks and resulting pollution. In this picture the existing coal ash ponds are in the foreground. Now, it is hard to say just where all the ash will go for the power plant. Photo © John Blair

The Kentucky Division of Waste Management has denied a pending permit for a coal ash landfill in Trimble County.

The proposed landfill would have been 218 acres, near Louisville Gas and Electric’s Trimble County Power Station. It was meant to store the coal ash produced by the plant, but ever since it was first proposed, the project has encountered numerous problems.

First, residents near the site protested. They worried their family homesteads would be ruined by air and water pollution. Next, a cave was discovered on site. Kentucky has fairly strict cave protection laws, so the Division of Waste Management began evaluating whether LG&E would be required to preserve it. More recently, historian Alicestyne Turley testified that the cave served a historical purpose, as well as an environmental one: she found compelling evidence that the cave had played a role in the Underground Railroad.

Now, the permit has been denied, and LG&E goes back to the drawing board. The Trimble County Power Station is a fairly new power plant (the first unit was built in 1990), and will burn coal for the foreseeable future. The two coal ash storage ponds on site are near capacity, so the company will have to figure out where to put the future coal ash that’s generated. LG&E spokeswoman Chris Whelan says the company will pursue another landfill on site, but in a place where it won’t harm the cave.

“We feel like the Cave Protection Act was designed to protect cave-dependent species and none have been identified at this particular site,” she said. The new plan will cost anywhere from $85 million to $115 million more, over the life of the landfill. “That is more money for the customers, and that’s why we had pursued the option with the karst-like feature on it,” Whelan said. “We were trying to pursue the least-cost option.”

Whelan didn’t know where on the company’s property the new landfill might be, or how it would affect the neighbors. A year ago, Trimble County resident Kelley Leach raised concerns about the proximity of the landfill to his home…and at the time, one alternative the company was considering was trucking the coal ash to the landfills at either of LG&E’s Louisville power plants–Mill Creek or Cane Run.

Kelley Leach says he doesn’t necessarily want to see that happen, out of concern for the neighbors of Louisville’s plants. Those living near Cane Run and Mill Creek say coal ash has contaminated their homes, and they fear the ash is also leaking heavy metals into the groundwater.

Download this page in PDF format
This entry was posted in Uncategorized and tagged Coal, Coal Ash, Kentucky, LG&E, pollution. Bookmark the permalink.