Are Agriculture Exports Killing Us?

January 22, 2014-by Tom Phillpot in Mother Jones Magazine. Editor’s note: Valley Watch has challenged the issued Title V permit given to Ohio Valley Resources, a huge producer of ammonium nitrate fertilizer, proposed for Rockport. Our main motivation for doing so is that large ammonium nitrate plants like this emit vast amounts of ammonia to the air, averaging in those we have found, more than 8 million pounds each year. Sadly, we lack the resources to challenge a similar plant proposed for the west side of Mt. Vernon to operated by a Pakistani company, implicated in supplying ammonium nitrate for “improvised explosive devices” used against American troops in Afghanistan. 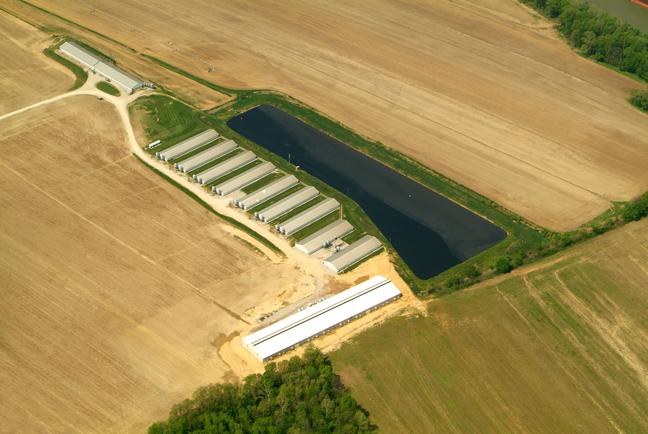 Chicken farms like this one of many in SW Indiana and Western Kentucky contribute greatly to the overall levels of ammonia in regional air. Ammonia is formed as chicken, hog and human feces degrades either in waste lagoons like the one above or in a kitty litter box. Photo © 2014 BlairPhotoEVV

Late last year, US Department of Agriculture chief Tom Vilsack boasted that US agriculture exports had hit an all-time high in fiscal 2013, and hailed “historic work by the Obama Administration to break down barriers to US products and achieve new agreements to expand exports.” Underlying Vilsack’s glee is the idea that growing huge amounts of food here and selling a big chunk of it overseas bolsters the US economy and stabilizes rural America.

Agricultural exports cause $36 billion in annual healthcare costs, along with about 5,100 premature deaths.

That kind of thinking has driven agriculture policy at least since the days when Richard Nixon’s ag secretary Earl Butz exhorted farmers to scale up operations and plant “fencerow to fencerow” in order to supply foreign markets.

But a new paper (PDF) from Harvard suggests massive ag exports might not be the economic boon imagined by USDA secretaries. The researchers looked at a single farm pollutant, ammonia (NH3), which makes its way into the air from fertilizer applied to farm fields and from the manure that accumulates on livestock farms. Once it enters the atmosphere, as Erik Stokstad explained in an excellent (pay-walled) news item in Science, it “reacts with other air pollutants to create tiny particles that can lodge deep in the lungs, causing asthma attacks, bronchitis, and heart attacks.”

2 Responses to Are Agriculture Exports Killing Us?