Duke Energy spills from 5,000 to 8,000 gallons of diesel fuel into the Ohio River near Cincinnati

The U.S. Environmental Protection Agency is serving as the Federal On-Scene Coordinator for the emergency response to an oil spill that occurred last night when approximately 3500 gallons of diesel fuel was released into the Ohio River from Duke Energy’s Beckjord power plant. Twenty-four hour operations are underway to contain and clean up oil along a 12 mile stretch of the Ohio River immediately upstream from Cincinnati.

“U.S. EPA, the U.S. Coast Guard and Ohio EPA quickly mobilized and are taking a series of steps to minimize the damage this spill does to the Ohio River and surrounding communities,” said U.S. EPA Incident Commander Steven Renninger. “U.S. EPA is on the scene to ensure the leaked oil is contained and cleaned up as quickly and effectively as possible.” 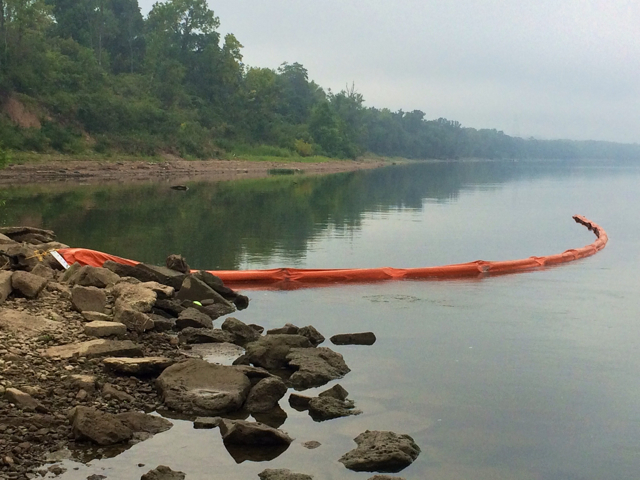 A containment boom is deployed on the Ohio River to deal with a fuel oil spill. (Photo by Dwayne Slavey)

U.S. EPA has established a unified command with the U.S. Coast Guard, the Ohio Environmental Protection Agency and Pierce Township. U.S. EPA is directing response efforts carried out by Duke Energy. Under the Oil Pollution Act of 1990, U.S. EPA has the responsibility for inland oil spills.

Boom was deployed in the Ohio River to contain the spill. Sheen extends approximately 12 miles from Duke’s plant down the Ohio River toward Cincinnati. The U.S. Coast Guard closed 15 miles of the river to vessel traffic.

As a precaution, the Greater Cincinnati Waterworks and the Northern Kentucky Water District each closed drinking water intakes on the Ohio River. The Ohio River Valley Water Sanitation Commission is conducting water sampling on the river.

For updates on the response to this oil spill, go to www.epa.gov/region5/newsevents/duke-energy-spill/

Duke Energy reported a significant spill of diesel fuel into the Ohio River on Monday night.

According to a company statement, about 5,000 gallons of fuel spilled into the waterway during a routine transfer of fuel oil at the W.C. Beckjord Station. The Clermont County power plant is about 20 miles east of the city of Cincinnati. It is slated to close by Jan. 1, 2015.

The spill lasted about 15 minutes and was stopped at 11:30 p.m., according to Duke. The Charlotte, N.C.-based energy company is working with local, state and environmental agencies.

“We notified state and local authorities of the incident and have been working with them throughout the overnight hours,” saidChuck Whitlock, Duke Energy president of Midwest Commercial Generation and vice president of gas operations. “We have cleanup crews on site that are identifying the appropriate actions that will be needed to remediate.”

The Hamilton County Emergency management Agency reported that the U.S. Coast Guard has closed a 15-mile section of the river (between river miles 453 and 468). Three public water intakes between the Beckjord plant and the Licking River confluence are shut down, as well.