The coal-gasification plant has now been operating for just over 18 months. Duke initially promised the plant would cost $1.9 billion, but the price tag has since ballooned to over $3.5 billion. Additionally, the plant has experienced significant construction delays, equipment and operational failures, and multiple start-up problems, adding to the already excessive price tag.

Just as Duke failed to build Edwardsport on time and on budget, a new report by Sommer Energy LLC on behalf of Citizens Action Coalition, Sierra Club, Save the Valley and Valley Watch displays that Duke has also failed to deliver a plant that operates as promised since Duke declared the plant “in-service” in June of 2013.

Duke claimed in October of 2011 that: “The plant’s high efficiency means that it can turn fuel into energy at a lower cost; in fact, at the lowest cost on our system.” As demonstrated in the report, neither of those statements have proven to be even remotely true. Since Duke placed Edwardsport “In-Service”, it has only been able to convert one quarter of its fuel into electricity, for an efficiency rating of 25%. This is a far cry from the 36% Duke promised and the 33% average efficiency that Duke’s coal fleet achieved in 2014. 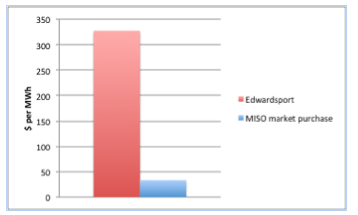 As a result of these and other problems with the plant, over the period from June 2013 to March 2014, the plant’s costs were 876% higher than if the power had been purchased on the market. Duke Indiana operates in the MISO marketplace where the cost of market purchases over the same period was $33.5 per MWh while Edwardsport came in at a whopping $327.03 per MWH.

Another bogus claim made by Duke Energy Indiana in October of 2011 was that “Edwardsport will be among the cleanest coal plants in the world and will be well positioned for any anticipated new environmental rules.” The truth of the matter is that among coal plants in the U.S., while Edwardsport did have the 9th lowest rate of SO2 (sulfur dioxide) emissions, the plant was only 86th in NOx (nitric oxide and nitrogen dioxide) and ranked an abysmally high 323rd in CO2 emissions.

The high rate of CO2 emissions means that Edwardsport is not “well positioned” to meet new environmental rules. In fact, Edwardsport would make compliance with the U.S. Environmental Protection Agency’s (EPA) new CO2 rules much more difficult and far more expensive, costing ratepayers an additional $88 million per year according to the report.

The IURC has the power to compel Duke to bear all of the additional costs outlined in the report, as well as the potential future EPA compliance costs. The IURC is prepared to hear about these and other issues related to the operation of Edwardsport. The outcome of that hearing will either provide ratepayers relief from these excessive costs or mean that customers will have to pay them for years to come.

Evidentiary hearings are scheduled to begin Wednesday February 4th at 9:30 A.M. and will be held in Room 222 at the PNC Center located at 101 W. Washington St in downtown Indianapolis.

The full report is available upon request and can also be found here: