November 23, 2018 – by  Coral Davenport and Kedra Pierre-Louis in the New York Times 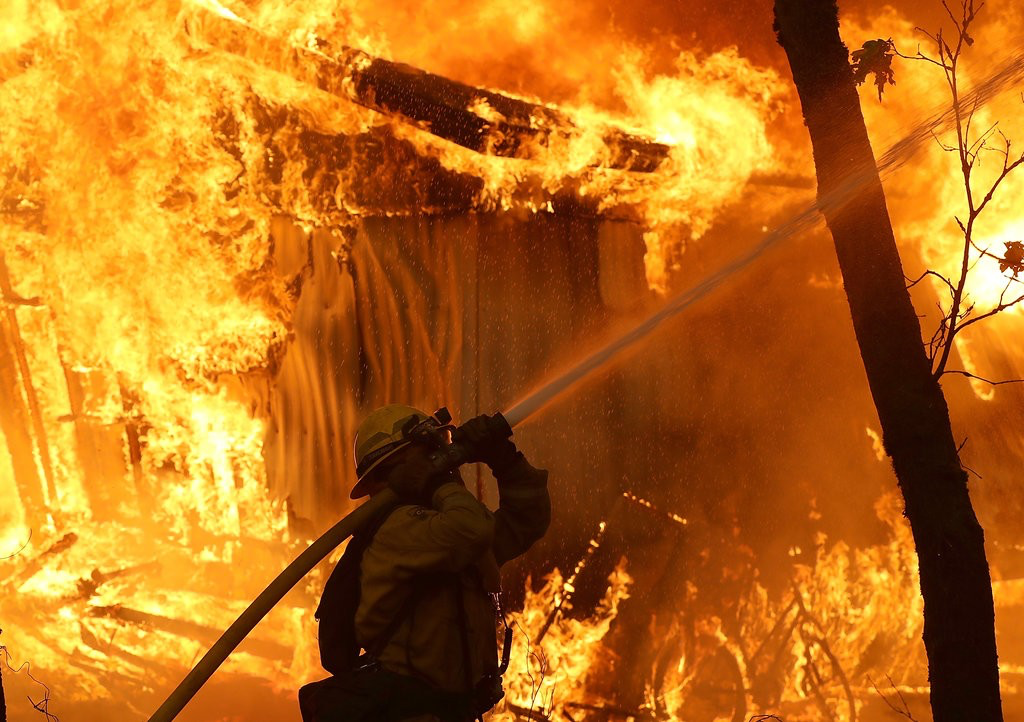 WASHINGTON — A major scientific report issued by 13 federal agencies on Friday presents the starkest warnings to date of the consequences of climate change for the United States, predicting that if significant steps are not taken to rein in global warming, the damage will knock as much as 10 percent off the size of the American economy by century’s end.

The report, which was mandated by Congress and made public by the White House, is notable not only for the precision of its calculations and bluntness of its conclusions, but also because its findings are directly at odds with President Trump’s agenda of environmental deregulation, which he asserts will spur economic growth.

Mr. Trump has taken aggressive steps to allow more planet-warming pollution from vehicle tailpipes and power plant smokestacks, and has vowed to pull the United States out of the Paris Agreement, under which nearly every country in the world pledged to cut carbon emissions. Just this week, he mocked the science of climate change because of a cold snap in the Northeast, tweeting, “Whatever happened to Global Warming?”

But in direct language, the 1,656-page assessment lays out the devastating effects of a changing climate on the economy, health and environment, including record wildfires in California, crop failures in the Midwest and crumbling infrastructure in the South. Going forward, American exports and supply chains could be disrupted, agricultural yields could fall to 1980s levels by midcentury and fire season could spread to the Southeast, the report finds.

All told, the report says, climate change could slash up to a tenth of gross domestic product by 2100, more than double the losses of the Great Recession a decade ago.

Scientists who worked on the report said it did not appear that administration officials had tried to alter or suppress its findings. However, several noted that the timing of its release, at 2 p.m. the day after Thanksgiving, appeared designed to minimize its public impact.

“This report will weaken the Trump administration’s legal case for undoing climate change regulations, and it strengthens the hands of those who go to court to fight them,” said Michael Oppenheimer, a professor of geosciences and international affairs at Princeton.

The report is the second volume of the National Climate Assessment, which the federal government is required by law to produce every four years. The first volume was issued by the White House last year.

The previous report, issued in May 2014, concluded with nearly as much scientific certainty, but not as much precision on the economic costs, that the tangible impacts of climate change had already started to cause damage across the country. It cited increasing water scarcity in dry regions, torrential downpours in wet regions and more severe heat waves and wildfires.

The results of the 2014 report helped inform the Obama administration as it wrote a set of landmark climate change regulations. The following year, the E.P.A. finalized President Barack Obama’s signature climate change policy, known as the Clean Power Plan, which aimed to slash planet-warming emissions from coal-fired power plants. At the end of the 2015, Mr. Obama played a lead role in brokering the Paris Agreement.

But in 2016, Republicans in general and Mr. Trump in particular campaigned against those regulations. In rallies before cheering coal miners, Mr. Trump vowed to end what he called Mr. Obama’s “war on coal” and to withdraw from the Paris deal. Since winning the election, his administration has moved decisively to roll back environmental regulations.

The report puts the most precise price tags to date on the cost to the United States economy of projected climate impacts: $141 billion from heat-related deaths, $118 billion from sea level rise and $32 billion from infrastructure damage by the end of the century, among others.

The findings come a month after the Intergovernmental Panel on Climate Change, a group of scientists convened by the United Nations, issued its most alarming and specific report to date about the severe economic and humanitarian crises expected to hit the world by 2040.

But the new report also emphasizes that the outcomes depend on how swiftly and decisively the United States and other countries take action to mitigate global warming. The authors put forth three main solutions: putting a price on greenhouse gas emissions, which usually means imposing taxes or fees on companies that release carbon dioxide into the atmosphere; establishing government regulations on how much greenhouse pollution can be emitted; and spending public money on clean-energy research.

A White House statement said the report, which was started under the Obama administration, was “largely based on the most extreme scenario” of global warming and that the next assessment would provide an opportunity for greater balance.

The report covers every region of the United States and asserts that recent climate-related events are signs of things to come. No area of the country will be untouched, from the Southwest, where droughts will curb hydropower and tax already limited water supplies, to Alaska, where the loss of sea ice will cause coastal flooding and erosion and force communities to relocate, to Puerto Rico and the Virgin Islands, where saltwater will taint drinking water.

More people will die as heat waves become more common, the scientists say, and a hotter climate will also lead to more outbreaks of disease.

Two areas of impact particularly stand out: trade and agriculture.

Mr. Trump has put trade issues at the center of his economic agenda, placing new tariffs on imports and renegotiating trade deals such as the North American Free Trade Agreement. But climate change is likely to be a disruptive force in trade and manufacturing, the report says.

Extreme weather events driven by global warming are “virtually certain to increasingly affect U.S. trade and economy, including import and export prices and businesses with overseas operations and supply chains,” the report concludes.

Such disasters will temporarily shutter factories both in the United States and abroad, causing price spikes for products from apples to automotive parts, the scientists predicted. So much of the supply chain for American companies is overseas that almost no industry will be immune from the effects of climate change at home or abroad, the report says.

It cites as an example the extreme flooding in Thailand in 2011. Western Digital, an American company that produces 60 percent of its hard drives there, sustained $199 million in losses and halved its hard drive shipments in the last quarter of 2011. The shortages temporarily doubled hard drive prices, affecting other American companies like Apple, HP and Dell.

American companies should expect many more such disruptions, the report says.

“Climate change is another risk to the strength of the U.S. trade position, and the U.S. ability to export,” said Diana Liverman, a University of Arizona professor and co-author of the report. “It can affect U.S. products, and as it drives poverty abroad we can lose consumer markets.”

The nation’s farm belt is likely to be among the hardest-hit regions, and farmers in particular will see their bottom lines threatened.

“Rising temperatures, extreme heat, drought, wildfire on rangelands and heavy downpours are expected to increasingly disrupt agricultural productivity in the U.S.,” the report says. “Expect increases in challenges to livestock health, declines in crop yields and quality and changes in extreme events in the United States and abroad.”

By 2050, the scientists forecast, changes in rainfall and hotter temperatures will reduce the agricultural productivity of the Midwest to levels last seen in the 1980s.

The risks, the report noted, depend on the ability of producers to adapt to changes.

During the 2012 Midwestern drought, farmers who incorporated conservation practices fared better, said Robert Bonnie, a Rubenstein Fellow at Duke University who worked in the Agriculture Department during the Obama administration. But federal programs designed to help farmers cope with climate change have stalled because the farm bill, the primary legislation for agricultural subsidies, expired this fall.

The report says the Midwest, as well as the Northeast, will also experience more flooding when it rains, like the 2011 Missouri River flood that inundated a nuclear power plant near Omaha, forcing it to shut down for years.

Other parts of the country, including much of the Southwest, will endure worsening droughts, further taxing limited groundwater supplies. Those droughts can lead to fires, a phenomenon that played out this fall in California as the most destructive wildfire in state history killed dozens of people.

The report predicts that frequent wildfires, long a plague of the Western United States, will also become more common in other regions, including the Southeast. The 2016 Great Smoky Mountains wildfires, which killed 14 people and burned more than 17,000 acres in Tennessee, may have been just the beginning. But unlike in the West, “in the Southeast, they have no experience with an annual dangerous fire season, or at least very little,” said Andrew Light, a co-author of the report and a senior fellow at the World Resources Institute.

Climate change is taking the United States into uncharted territory, the report concludes. “The assumption that current and future climate conditions will resemble the recent past is no longer valid,” it says.

There is always some uncertainty in climate projections, but scientists’ estimates about the effects of global warming to date have largely been borne out. The variable going forward, the report says, is the amount of carbon emissions humans produce.

Coral Davenport covers energy and environmental policy, with a focus on climate change, from the Washington bureau. She joined The Times in 2013 and previously worked at Congressional Quarterly, Politico and National Journal. @CoralMDavenport • Facebook

Kendra Pierre-Louis is a reporter on the climate team. Before joining The Times in 2017, she covered science and the environment for Popular Science. @kendrawrites

A version of this article appears in print on Nov. 23, 2018, on Page A1 of the New York edition with the headline: U.S. Climate Study Has Grim Warning of Economic Risks. Order Reprints | Today’s Paper | Subscribe

Download this page in PDF format
This entry was posted in Uncategorized and tagged Climate Change, Disaster, global warming, Trump. Bookmark the permalink.