Just weeks after recent headlines about hexavalent chromium, a cancer-causing toxic chemical, contaminated drinking water systems around the U.S., a new report shows that scores of leaking coal ash sites across the country are additional documented sites for such contamination.

Public interest law firm Earthjustice, Physicians for Social Responsibility and Environmental Integrity Project are pushing for federally-enforceable safeguards from coal ash as this new information is released. Also, in a signal that the Senate Environment and Public Works Committee recognizes the hazards of hexavalent chromium exposure, they have called on U.S. Environmental Protection Agency Administrator Lisa Jackson to testify tomorrow on a hearing about the chemical. 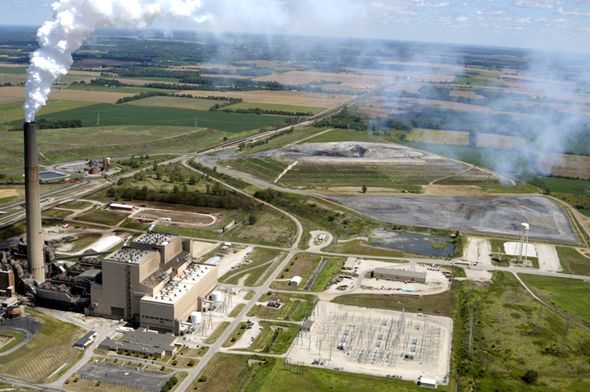 Hoosier Energy's Merom coal ash landfill (toward background), near Sullivan, IN made the EarthJustice et al report. Residents nearby have strongly opposed Hoosier Energy's proposal to build yet another landfill due to widespread contamination, File Photo © 2010 John Blair

“Communities near coal ash sites must add hexavalent chromium to the list of toxic chemicals that threaten their health and families,” said Lisa Evans, senior administrative counsel at Earthjustice. “It is now abundantly clear that the EPA must control coal ash disposal to prevent the poisoning of our drinking water with hexavalent chromium.”

Coal ash, the leftover waste from power plants, contains arsenic, lead, cadmium, mercury, selenium and many other chemicals that can cause cancer and damage the nervous system and organs, especially in children. Hexavalent chromium is a highly toxic carcinogen when inhaled, and recent studies from the National Toxicology Program indicate that when leaked into drinking water, it also can cause cancer.

“The cancer risk from hexavalent chromium is one more serious threat to health from coal ash,” said Barbara Gottlieb, Deputy Director for Environment & Health at Physicians for Social Responsibility. “To protect the public from carcinogens and other dangerous substances, the EPA needs to regulate coal ash as a hazardous waste.”

“The pollution from coal ash sites is making people sick,” said Dalal Aboulhosn who works on coal ash for the Sierra Club. “As we’ve seen time and again, big polluters can’t be trusted to police themselves. We need the EPA to hold them accountable.”

“Studies by the EPA, the state of California, and the Agency for Toxic Substances Disease Registry show that ingesting minute amounts of hexavalent chromium increases the risk of cancer,” said Eric Schaeffer, executive director for Environmental Integrity Project. “Coal ash dumps have contaminated groundwater with much higher concentrations of this deadly carcinogen, according to the industry’s own monitoring data. The Obama Administration should keep its promise to respect science and protect the public’s health, by putting strict standards in place to keep this contamination from spreading even further.”

Among the findings from the new report:

Download this page in PDF format
This entry was posted in Uncategorized and tagged Coal Ash, EPA regulations, Hoosier Energy. Bookmark the permalink.