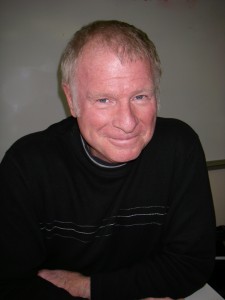 The Pulitzer Prize-winning photojournalist visited the classes of lecturers Steve Higgs and Bonnie Layton last week to talk about his career and his organization, Valley Watch, which aims to protect the environment in the Ohio River valley.

Like many advocates, Blair started out in traditional journalism, establishing himself as a photojournalist during the 1970s. Working for UPI, he won a Pulitzer Prize in 1978 for his photograph of Indianapolis resident Tony Kiritsis holding his mortgage broker hostage at gunpoint.

That same year, he helped form Valley Watch, an Evansville-based advocacy organization that works to protect the Ohio River valley from environmental harm. Blair said he was drawn to advocacy journalism because he wanted to act on what he had learned from the stories he had reported.

“When people become informed it’s really hard for them not to act on that information,” Blair said.

When his daughter was born, he said he realized he would have to change his life.

Soon, Blair was running the Ohio Valley Environment, a local environmental paper. Professional pressures also helped shape his career. During a meeting with the national editor of The New York Times, Blair realized his heart was set on being an advocate.

“He read my paper and said you can write for us, but you have to give this up,” Blair said. “At that time, advocacy journalism did not exist.” Blair opted not to take the job.

Since then, Blair and Valley Watch have worked to help make southern Indiana a more environmentally friendly place by lobbying organizations and working with other groups to educate the public about environmentally dangerous situations. They have fought coal and gas companies, and government plans to store potentially toxic materials near communities.

His work makes use of both his master’s degree in journalism and his undergraduate degree in business and public policy.

“I use that degree every day,” Blair said about the value of his business degree when interacting with big energy business or government agencies.

For the students in Layton’s J261 Online Journalism class, Blair was an example of what a journalist can do outside traditional journalism.

Blair spoke to both Layton’s and Higgs’ classes, but it was Higgs who brought Blair to campus.

“I brought John in to show students how he uses the tools of journalism,” Higgs said, who also is teaching C201 Environment and the News. Blair also spoke to that class.

Higgs, who worked for the Herald-Times before starting his own newspaper and website,Bloomington Alternative, said the Internet is creating more avenues for different viewpoints.

“The Web is encouraging advocacy journalism,” Higgs said, by driving mainstream outlets to incorporate personal blogs into their mainstream coverage and for smaller organizations to have a voice.

Advocate or not, John Blair continues think like a journalist.

“You’ve got to be curious,” Blair said, but what drives Valley Watch is his belief that some arguments are right and others are wrong.

Blair mentioned Indiana Gov. Mitch Daniels’ proposal to build more power plants in southern Indiana as a situation where treating both sides of the story as equal would be dishonest to the public.

“Fairness is important,” Blair said “but some sides are immoral and that should be pointed out.”