How Much Poison is OK for Our Kids?

As a mother of four, the question is absurd to me. Really, can you imagine if you asked someone that question and they answered, “Well, some is ok, as long as it doesn’t kill them, subjecting them to injury and chronic illness seems fine.” That would be insane.

But that is the insanity we are living with today. Coal-fired power plants spew mercury, lead, arsenic and radioactive waste into our air and water with disastrous consequences.

The coal plants are not just spewing a little toxic pollution. They are literally flooding tons into our air and water. Consider this: It takes one gram of mercury per year to contaminate a 20-acre lake so the fish are unfit for human consumption. America’s coal-fired power plants put 72,386 pounds of mercury into the air every year! (To put that in perspective, that’s over 31 million grams of mercury put into our air and water every year.) 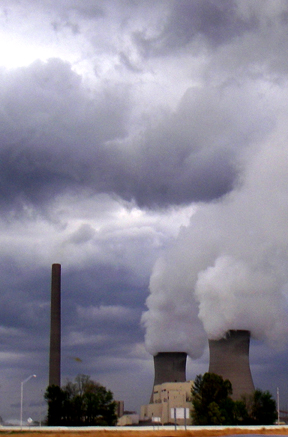 AEP's Rockport power plant, which serves customers in NE Indiana and S Michigan, emitted more than 1220 pounds of mercury in 2009, the most recent year data was available and at a time when electrical production was down significantly due to the recession. At one point the plant emitted more than 3/4 of a ton of mercury into areas downwind and could be expected to again as the economy improves. Photo © 2011 John Blair

Mercury has been proven to cause neurological damage in children. It lowers their IQ and is linked to childhood asthma, cancer and autism. 410,000 infants are born every year in America having been exposed to unsafe levels of mercury while in the womb. Mercury reduces a child’s ability to become a productive member of society, and we all pay a huge price in the impact it has on our families, communities and country.

Yet there are still those who oppose regulations crying, “We can’t afford pollution controls! It’s too expensive!” But for WHOM is it too expensive? In every instance, it is cheaper to prevent pollution than to clean it up. But when polluters pollute for free, it is no wonder they pay to fight regulations. (And they fight hard: the utilities spent $134 million lobbying in 2010.) The parents of children with asthma and autism don’t have the time or money to fund lobbying efforts to reduce mercury from power plants. Without regulations, the burden falls on all of us pay the enormous costs of the injustice of unchecked pollution. We pay with our health, well-being and all of the associated costs, including the huge financial burden of skyrocketing healthcare costs and government funded clean-up efforts.

As with the deceptively clever “Clear Skies Initiative” (Bush-era legislation that actually allowed for more pollution) the polluters have succeeded in convincing elected officials that it is not cost effective to cut pollution.

• Here’s the good news. For the first time ever, the Environmental Protection Agency has proposed national standards to reduce toxic air pollution from power plants. The benefits of the proposed Mercury and Air Toxic Standards are staggering. The reductions in mercury alone would:
• Prevent as many as 17,000 premature deaths a year
• Prevent as many as 11,000 heart attacks each year
• Prevent approximately 120,000 cases of childhood asthma symptoms each year
• Prevent 11,000 cases of acute bronchitis among children each year
• Prevent more than 12,000 emergency room visits and hospital admissions each year
• Prevent 850,000 days of work missed due to illness each year.
The EPA studies have estimated the new ruling will not only improve health, but the economic benefits will outweigh the costs by more than 10 to 1. This is good environmental policy, this is good public health policy and this is good economic policy- pure and simple. Without regulations you and I pay the price to clean up the polluters’ mess. Worse yet, if the mess is not cleaned up, you and I pay an even greater price.