Nov. 22, 2011 — There’s been a big spike in the number of people who need emergency medical attention after they guzzle popular caffeinated energy drinks, according to a new government report.

The report shows a more than a tenfold increase in the number of emergency room visits tied to the use of these drinks between 2005 and 2009.

Beverage manufacturers fired back at the statistics, charging that they are misleading since they are being taken out of context. 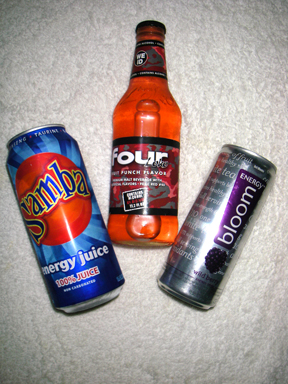 Energy Drinks can lead to acute medical problems in those who consume them. Some like Red Bull® and 5 Hour Energy® are widely promoted as performance enhancers for everything from work habits to sex to athletics. Some like Four Loko have a mixture of caffeine and alcohol which can be particularly dangerous if abused. Photo © 2011 John Blair

“Of the more than 123 million visits made to emergency room facilities each year, less than one one-hundredth of one percent involved people who consumed energy drinks according to this report,” says the American Beverage Association in a statement.

“Even so, this report shares no information about the overall health of those who allegedly consumed energy drinks, or even what symptoms brought them to the ER in the first place,” the statement says.

Energy Drinks and the ER

While 44% of cases involved energy drinks in combination with alcohol or otherdrugs, the report shows most people who wound up in the ER told doctors they had downed only energy drinks.

“There’s been quite a bit of attention paid to those energy drinks that have alcohol with them. What we found was that there are actually more visits for those energy drinks that don’t have alcohol,” says Albert Woodward, PhD, director of the Drug Abuse Warning Network (DAWN) at the Substance Abuse and Mental Health Services Administration in Rockville, Md. DAWN reports, such as this one, are published periodically by the network.

“People may think that the alcohol-caffeine drinks are dangerous, but they may not have any idea that the caffeine-only drinks are also potentially problematic,” Woodward says.

Experts who study the health effects of energy drinks called the finding surprising and worrisome.

“I do a lot of my research on combining alcohol and energy drinks and I know that’s really risky, but energy drinks by themselves, it’s been quite in debate whether they’re really all that dangerous,” since they’re supposed to contain about the same amount of caffeine as a cup of coffee, says Cecile Marczinski, PhD, an assistant professor of psychology at Northern Kentucky University, Highland Heights.

But Marczinski said she recently learned that manufacturers don’t have to report the total caffeine that’s in the drinks. They only have to list what they add. There may be much more caffeine that comes from stimulant herbs like guarana.

“The caffeine in these drinks could be vastly underestimated,” she tells WebMD.

Young adults, usually men, were most likely to get into trouble using energy drinks, the report shows.

Marczinski says that’s not surprising since the drinks, which come in brightly colored cans and have macho, high-octane names, are made to catch the eye of teens and young adults, who may not yet be coffee drinkers.

But she thinks the drinks are more dangerous than coffee, for several reasons. They come in large containers, making it easy to slug several servings in a single sitting. And because they’re usually sweet and served cold, they are tempting stand-ins for thirst quenchers like water or sports drinks.

“So it is easier, I think, to consume more of an energy drink than any other caffeinated food or product,” Marczinski says.

The report didn’t gather data on the specific symptoms that sent people to the hospital. Most were simply classified as adverse reactions.

Those effects may be amplified if a person has already taken another medication or drug.

The report showed that 27% of people who landed in the ER after using energy drinks were also taking another pharmaceutical, often a stimulant medication likeRitalin.

In about 16% of the cases, alcohol was also a factor. In 10% of the visits, energy drinks had been used in combination with illegal drugs.

Adults ages 18 to 25 were most likely to get into trouble combining energy drinks with other substances.

The lesson for college students about to cram for final exams is “pace yourself,” says Kuittinen. “Nothing beats getting at least seven hours of sleep a night.”

Besides, overdoing energy drinks probably won’t help. “Your thoughts are going to be disorganized. You’re going to be hyper-jittery and just wired,” and that’s not likely to lead to a better grade, she says.