On January 25, the Indiana Department of Environmental Management, IDEM (otherwise known as It Doesn’t Even Matter) held a pubic hearing to take testimony on their “draft” air pollution permit for the nefarious Rockport Indiana Gasification proposal. Opponents who spoke outnumbered those in favor by a 2:1 margin but that will not matter in the end because this project is being pushed by Governor Mitch Daniels as a way to enrich his friends at the New York investment hedge fund, Leucadia National Corp. 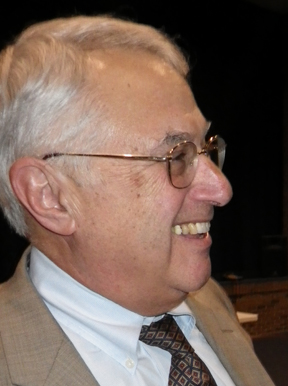 This picture is Leucadia lackey, William Rosenberg who is laughing at the hearing because he knows that whole thing is a scam in which he will get rich of the backs of Indiana gas consumers who will be forced to pay a premium just for the privilege of buying syngas made from coal instead of the considerably less expensive natural gas that a contract between Leucadia and the State of Indiana requires.

Below are two videos of testimony from the hearing. The first is Mr. Chuck Botsko who spoke eloquently and comprehensively about the pitfalls the proposal offers and the second is Valley Watch president, John Blair who spoke with some anger at the whole deal which makes zero sense economically but is still steadfastly supported by State Government. Photo © 2012 John Blair. Video: Ben LaBudde and John Blair.