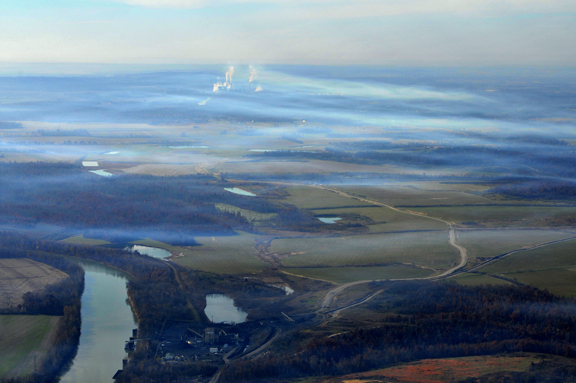 Surreal waves of sulfate air pollution engulf the area just north of the Sebree, KY power complex. Sulfate particles present as a bluish cast as sulfur dioxide (SO2) from coal burning mixes with oxygen molecules (O2) to form sulfate particles (SO4). In this case, the emissions from the power plant looked very odd from the air above. Photo © 2012 John Blair.

Air Quality in the Evansville region continued to be poor today with fine particles increasing to 39.23µg/m3 during the 9 AM hour. Of course, there was no alert issued since that just does not happen even as levels exceed the US health based 24 hour standard 35µg/m3.

Flying to do an aerial photo for a client in Owensboro in that same hour revealed how particulates can take on a surreal look as they engulf the region from the numerous coal fired power plants that permeate the region.