November 20, 2012-by Dave Stafford in the Indiana Lawyer

A judge who ruled against opponents of the conversion of a former coal-fired energy plant in Jasper abused her discretion on a series of matters, the Indiana Court of Appeals held Monday in reversing a bench trial that found for the city. 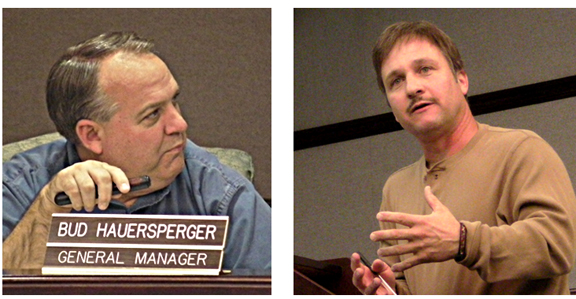 Rock Emmert (R) from Ferdinand, IN, sounds off to Jasper Municipal Utility Generla Manager, Bud Hauersperger, during a hearing held October 11, 2010 where more than forty Jasper area citizens spoke against the proposal to turn the mothballed Jasper Municipal 15 megawatt coal plant into a 75 megawatt biomass and natural gas plant. People across Jasper objected to the facility but in the end the out going mayor signed a contract with a company who’s corporate address was in the middle of a fairway on a golf course in Georgia according to Google Earth. File Photos: John Blair.

The appellate panel stopped short of saying that there were clear violations of the Indiana Open Door Law by the city or its “volunteer” board dominated by city official that met frequently with representatives of a company that won the city’s endorsement of a proposal to convert a dormant coal-fired plant to a biomass-burning plant.

A citizens group called Healthy Dubois County formed to oppose the project because of concern that burning miscanthus grass to produce electricity could carry public health risks. It sued in an attempt to block the signing of any agreements on the plant conversion, claiming among other things that officials had violated the Open Door Law with meetings that led to approval of the proposal.

“In sum, HDC has demonstrated that it was diligent in pursuing discovery, but was thwarted for months by Jasper’s refusal to cooperate. Less than two weeks prior to trial, HDC obtained information in the course of depositions that suggested possible Open Door Law violations by the volunteer group. The trial court abused its discretion when it denied HDC’s third motion to amend its complaint, filed only four months after its initial complaint and while discovery was ongoing,” Judge Edward Najam wrote for the panel.

“The trial court abused its discretion when it denied HDC’s motion to continue the trial. We reverse and remand with instructions that the trial court: (1) grant HDC’s third motion to amend its complaint; (2) grant HDC an additional thirty days to conduct new discovery, including but not limited to depositions; (3) grant HDC’s second motion to compel discovery; and (4) schedule a new trial to be held no less than thirty days after the close of discovery.”

The panel also noted the unusually swift nature of the bench trial. In a footnote, Najam wrote, “Our research has not revealed any cases involving the Open Door Law where the time between the filing of the complaint and trial was so abbreviated.”