October 11, 2013 – by John Blair, valleywatch.net editor. Editor’s note: I must admit to a certain amount of skepticism when I deal with the Indiana Department of Natural Resources due to their really lax regulation of the coal industry and years of fielding calls from residents of SW Indiana who were never able to get any satisfaction after filing complaints with DNR over a multitude of issues. That inaction caused me to nickname the agency the Department of No Response. 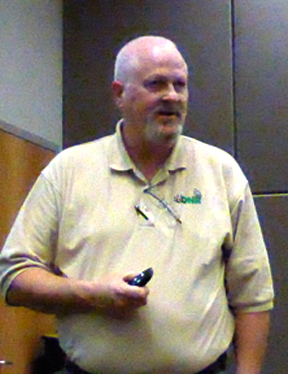 Last night (10/10) I was able to attend a presentation on by the Director of Indiana DNR’s Oil and Gas Division. Prior to the meeting, I introduced myself to Herschel McDivitt whom I told, “I am conflicted regarding fracking since like most people I want to heat my home and office as inexpensively as possible, but I certainly don’t want to do that at the risk of destroying waters supplies or exacerbating climate change.”

I then told him that I thought greater regulation of fracking would involve an increase in the price of natural gas by $2-3 per million Btu. That when he revealed his true color as Indiana’s number one fracking regulator, “It’s heavily regulated already,” he said, seemingly ignorant of the fact that fracking was “exempted” from regulation in 2005 from the Safe Drinking Water Act, the Clean Water Act, the Clean Air Act and other federal laws designed to protect the environment and health.

But he knew of the exemption and later in his presentation he asserted that the federal government had no place in regulation of oil and gas hydraulic fracturing as it is officially called.

McDivitt scoffed at the democratic process used to develop relatively stringent regulation of fracking  in neighboring state, Illinois because there is too much misinformation out in the public concerning the process.

He said fracking was not responsible for the earthquakes experienced in the aftermath of fracking in Ohio, instead blaming those quakes on “disposal wells” that were drilled to get rid of the large volume of fracking waste created in both Pennsylvania and Ohio.

One claim he made was that recent Indiana legislation forced drillers to report the chemicals they were using as fracking fluids but acknowledged there was no audits or enforcement to assure the self-reporting the drillers made were true. He said that the real enforcement would come from drilling contractors or competitors but then agreed that after the chemicals were in the ground there was little they could do to get them removed.

He insisted that there is “no documented proof” that fracking has ever contaminated any ground water in Indiana or the nation.

In that regard, he chided activists like Gasland’s Josh Fox for being “misinformed” and “having an agenda.” In fact, he blamed much of the bad public relations experienced by the industry as being attributable to “anti-capitalist” and “NIMBY’s,” who were out to destroy the fossil fuel industry.

He compartmentalized the various opposition to fracking that has emerged offering the graph below as if to claim that there is so much misinformation that is creating each of the slices of his pie. Then he compared the hazards of fracking with “puppies (bites), caffeine, mosquitoes, bicycles, etc. are more hazardous to human health, and safety than hydraulic fracturing?.” 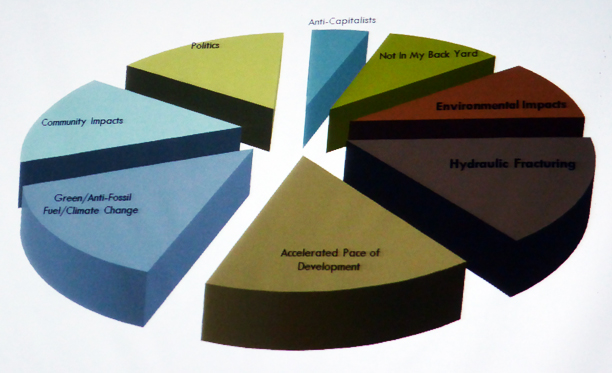 What concerns me most about this lackadaisical attitude is that this is the man who is setting the regulatory agenda for high pressure hydraulic fracturing in Indiana, the man who will make the ultimate decisions regarding the controversial practice.

Of course, I am not surprised, since like most regulators in this state, he was hired away from the industry he is now regulating in the early days of the Daniels Administration and Daniels wrote an op/ed piece in the Wall Street Journal in 2011 calling for the elimination of government regulation and for industry to “self regulate” in order to protect human and the environment.

What is particularly distressing about this is a snippet he offered in a private conversation after his presentation that companies currently operating in Illinois were investigating moves to Indiana due to Illinois’ more stringent regulation.

Sadly, as we know, all oil and gas drilling in Indiana pretty much takes place in southwest Indiana, because as McDivitt say, “That is where the oil and gas (and coal) are.”