This video definitively shows that solar electricity had its roots more than 60 years ago. A few years later, I was working in a Rexall drug store and we had a promotion of a new solar powered transistor radio that really fascinated me. That was probably 1961.

In 1978, the predecessor to Valley Watch, the “Nuclear Waste Action Committee” sponsored Sun Day where several solar businesses displayed their wares on the Walkway across from the Civic Center.

Throughout the early part of the 1980s, numerous solar advocates built homes using a variety of “passive” and “active” solar technologies. Murphy, Jim Morgan of Midwest Roofing, Arkla Industries and a team consisting of Paul Fulkerson and John Barabe built high quality homes that were able to compete in the residential market and save people energy dollars over their life. 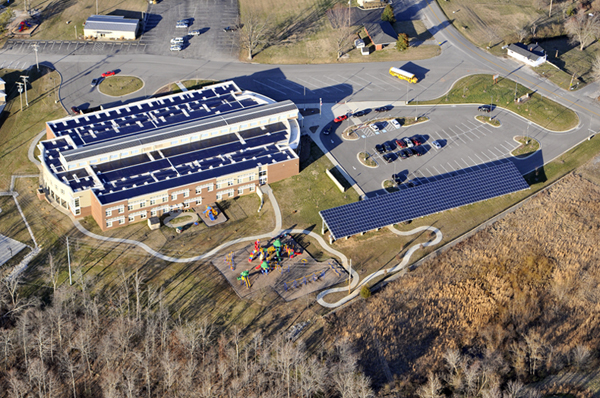 This school near Bowling Green, KY was outfitted by Evansville’s, Morton Solar and Wind and is actually not only saving energy but adding to the grid especially during the summer months when school is not in session. Photo © 2012 BlairPhotoEVV

Sadly, Ronald Reagan was elected in 1980 and the burgeoning business of solar was brought to a halt. In fact, Reagan’s Energy Secretary, dentist, James Edwards was quoted saying the “Solar energy has t make it in the marketplace,” and thus the meager subsidies offered to solar and other renewables were dropped and the massive subsidies for oil, coal and nuclear energy were increased. Solar panels that were placed on the Whitehouse during the Carter years were removed under Reagan whose corporate allies could see that distributed energy like solar and wind would impact their chosen monopolistic business models.

Since then solar has made steady but slow gains but thirty years of development including new panels on the Whitehouse, and we see solar now at an affordable cost and greatly less expensive than new coal or nuclear plants.