Will Evansville and Vectren ever embrace renewable energy?

Evansville’s electricity is generated by 96% coal. Coal may be cheap, but the controls to clean up the air and water from its wastes are very expensive. Other cities are now able to thrive with affordable clean energy. Why not us?

Want an example? According to a January 2014 rate survey, the Portland, OR residential ratepayer paid $63.34 for a 500kWh bill; whereas the Evansville ratepayer paid $83.77 for that same 500kWh bill. Portland ratepayers can also chose to power their houses with renewable energy, a mix of 98% wind, 1% geothermal, and 1% solar. The extra cost for the average household to go with renewables is approximately $7.00 a month. I would love that option! I could be 100% renewable in Portland and still pay less than what I pay Vectren! 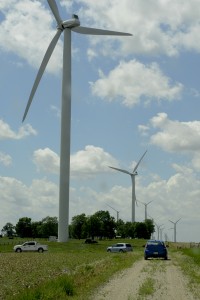 Vectren’s stance is that they don’t need new capacity, so they aren’t adding renewables. And, since they are still entitled to recovery on the coal plants and all their related pollution controls, the ratepayers would have to pay for both the old and new generating units. Ouch! Why do we have to keep paying for what we don’t want?

That’s where our State government comes into play. Utility lobbyists managed to hi-jack our state into passing Senate Bill 251 in April 2011. That Bill allowed utilities to keep upgrading the old coal plants and keep charging ratepayers for the upgrades without any rate hearing to allow customers to comment. That Bill is why we are still in debt for old technology that prevents us from moving ahead into the future. It’s the ratepayer equivalent of massive student loans that can never be discharged in bankruptcy.

So, Vectren is sitting smug, knowing they will be paid for a product we don’t want. And, they helplessly say – sorry, renewables are just too expensive.

Let’s let Vectren know LOUDLY that their lobbyists may be clever, but we want clean renewables NOW. We want them at an affordable price.   We want them to STOP spending on old technologies and passing that cost onto us.

5 Responses to Will Evansville and Vectren ever embrace renewable energy?